It’s time once again to dip in the old mail bag and find out what kind of cycling-related dilemmas our loyal readers are currently dealing with.  So let’s end this opening paragraph right now and dive directly into the pending query.

Dear Bertha,
I have always had a problem with the chamois edges on my cycling shorts. Pardon my bluntness, but the edges really cut into me.  I have tried different brands of shorts with all different sorts of chamois and padding, as well as all kinds of lotions and ointments and such – but the results always turn out the same. I was wondering if you could suggest anything that could possibly help with the chaffing that I suffer after several hours and/or miles on the saddle.
Pain in the Butt, Sandy Bottom, NC

Dear Pain in Sandy Bottom,
Even though I may have forsaken cycling for my newfound love of running until my legs bleed (yeah, right!), I don't mind at all sharing what I found to work best for me during my many cross-state cycling journeys. 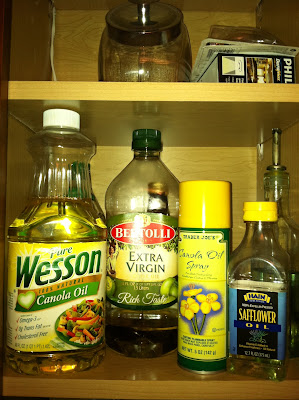 First, I completely soaked my shorts in Wesson Canola Oil (you'll need about a gallon in a big pot because you'll want your shorts to really soak up the oil). It is rich in Omega 3 so your heart will also benefit from wearing these specially treated shorts. Prior to putting your shorts on, you need to pour 1/2 cup of Bertolli's Extra Virgin Olive Oil all over the padding. I'm sure there's some sort of joke to be made here about the "virgin" thing but this is a serious matter so I'm going to just keep it factual and not be sucked into some sort of childish, 6th grade humor.

Now, just before you pull your shorts completely up, use some Trader Joe's Canola Oil Spray all over your rear end and naughty bits. Be careful during this process because the Canola Oil Spray is highly flammable - you don't want to be smoking a cigarette (or anything else) at this point. Go ahead now and pull your shorts completely up and walk around in them for a few minutes before starting your ride. It will be a little strange and somewhat slushy feeling at first but you will get used to it.

When you're ready to start the ride, use a healthy portion of the Hain Safflower Oil directly on your bicycle saddle. You can just rub this in by hand for about two or three minutes to get the best results. This has a lot of Vitamin E in it so it is really best suited for real leather saddles - plus, it has enhanced fresheners in it so you will be really glad you used this at about mile 80 - as will anyone else riding within twenty feet of you.

I’m sure once you follow this simple procedure, you will be more than able to…

(Note: All products mentioned in this article are just regular items that you should be able to find in your friendly neighborhood grocery store or truly “alternative” bicycle shop. More On Cycling does not receive any monetary compensation for mentioning these items nor does it receive any percentage of the profits once these products fly off the shelves at lightning speed after thousands upon thousands of cyclists start using these products on the padding in their cycling shorts. Darn!)

(More On Notes: More On Cycling takes no responsibility for anyone who takes this article seriously and who possibly unknowingly rides their bicycle past a family of cannibals and is mistaken for a meal ready to throw into the frying pan.)

CYCLING WITHOUT A BICYCLE


It seems almost logical… you start out riding that indestructible bicycle that your parents bought you. Indestructible basically being interpreted as “heavy as all get out” – say 50 or 60 pounds. Then, as you get older and want to go further and faster, the next step is to get a lighter, more responsive bike. The next thing you know, you’ve joined the local bike club and you convince yourself that if you could just shave a few more pounds off that bike, you could keep up with the Big Dogs. It’s like there’s no end in sight – lighter equals faster.

So now, back to the “it seems almost logical” part. What if… just what if… you were to completely remove the bicycle? I mean, you can’t get much lighter than that can you?

Okay, so your first argument may be that by removing the bicycle completely, one wouldn’t have the benefit of a gearing system that tends to make the wheels spin at a higher rpm than the rpm that your feet are spinning. But that argument is too logical. We only like to deal with “almost logical” items in this column. So, for the sake of “almost logical,” we’re going to completely remove the bicycle from the bike ride and… go for a run.

It all started when I went to Fort Worth (Foat Wuth) to watch my daughters run in the Cowtown Marathon in February of 2011. I must admit, there was a lot of excitement in the air as we watched the runners take off at the start of the marathon and half-marathon. There was even more excitement as well as several good doses of emotion (and agony and relief and laughter and “Oh my God I’ve finally made it!”) from the runners, my daughters included, as they crossed the finish line. I must also admit, there was something else in the air that just made you want to be a part of all that – maybe as a participant instead of just a spectator. And whatever that was that was in the air made it all too easy to say to my daughters, “Yeah! I think I can do this with you next year.”

At least that what they told me I said.

But, nevertheless, I proceeded with that statement in mind as the end of 2011 rolled around. Sometime around early-August, I made the next commitment – I registered for the 5K race. That seemed like the logical first step to take. (Darn. There I go being logical again.) Actually, there was nothing logical about it all. As far as I knew at that moment in early August, I was pretty certain that I basically hated running. But there I was, investing $25 in doing something I hated. But that was nothing compared to the dough I shelled out the first part of September for running shoes and shorts and shirts and socks. Yeah Baby! We’re going to force ourselves to enjoy this one way or another.

After deciding that over three months was long enough to procrastinate, the running shoes and shorts and shirt and socks made their pavement debut on January 2nd as I set out around the three-mile course that I had mapped out around my subdivision. The first few times, there was a hint of running involved. Mostly it was just a brisk walk. But that’s okay – I’m old – and I hate running! But I still had about eight weeks to start liking it enough. Anything is possible.

My little three-mile course became a 3 to 4 times a week routine. Slowly but surely more and more segments of “brisk walk” turned into “jogging with a smidgen of running.” Slowly but surely “hatred” turned into “mild dislike.” Never once did a thought anything like, “I’m going to go to Fort Worth and blow the doors off the competition in the 5K run,” ever enter my head – as I zeroed in on the 12-minute mile during my training. I can’t even tell you what possessed me to return to the running store and buy yet another pair of shorts and another running shirt – other than I didn’t like doing laundry every other day. But still, I kept running my course – my 12-minute mile pretty much a 50/50 combination of “very brisk walk” and “fairly good jog/running/thingy.” I could do this. Piece of cake.

Race Day – February 25th – downtown Fort Worth. There was the same excitement in the air at the start line as there was last year. Unfortunately the air was about 20 degrees cooler that it was last year. My daughter reassured me, as she was searching for a spot with sunshine to stand in, that when we start running we won’t be cold.

I asked her, “Why are we standing near the sign that says: 7 TO 8 MINUTE MILE?

She replies, “The sun is shining here. There are lots of people here. It’s warm.”

I’m thinking to myself, “I’m going to get ran over as soon as the gun goes off.” Maybe I said that out loud – as I turned to look at the 5000 people in the mass behind me.

Finally, the race started. I actually start running. Not my usual “brisk walk” start – but an actual running start. This seems good. That is, it seemed good until I immediately start running into the back of people who merely started “walking” when the race started. What is wrong with these people? Don’t they know that they are up here with the 7 to 8 MINUTE MILE people? Can’t they read the signs?  Good grief!

We had probably ran… oh… maybe ONE city block when we turned the corner and encountered…A HILL! What the heck is this? A HILL? A HILL on the 5K course? And it’s an UP hill nonetheless. I’m telling myself, “I’ve got to keep running. I’ve got to keep running. Just get me to the top of the hill….” – and then I tell my daughter I’ve got to shift into “brisk walk” mode or I’m not going to get to the top of the hill. She adjusts her jogging to accommodate me. She’s a good daughter. She would probably already be finished with the 5K if she wasn’t jogging little baby steps beside me while I finished brisk walking up this hill! 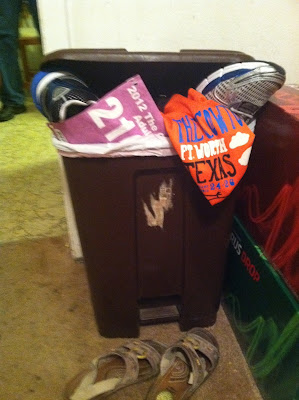 At one point, just before the Mile 2 marker, I had slowed to do the “brisk walk” and she kept going. I thought, “Good. She’s going to just go ahead and finish at her pace.” A few minutes later I saw her standing on the sidewalk, waiting for me. I asked, “Why didn’t you keep going?”

“I was following someone else who was also wearing a blue shirt and I was so proud that they kept running and weren’t slowing to walk – then I realized it wasn’t you!”

But the best words of encouragement my daughter gave to me were as we were approaching the Mile 3 marker: “Start running – that 90-yearold guy just passed you!”

I had hoped that the thrill of just being there amongst all those runners would help nudge me over my 12-minute mile mark but no such luck. We crossed the finish line 37 minutes after we started. For now, I’m blaming it on the hills. There aren’t any hills on my neighborhood training course. But I finished 2531 out of 5101. That’s in the top half. I’m cool with that! It’s even cooler that one of my daughters was by my side as I finished my first race.

But you know what was really cool? When I was able to get back on my bike to…

Enjoy the ride!
Posted by Bertha Ashtabula at 1:51 AM 1 comment:
Email ThisBlogThis!Share to TwitterShare to FacebookShare to Pinterest

Who IS Bertha Ashtabula?