I was out riding the other day, enjoying the brisk air and the sunshine along one of my normal routes from my house. I was planning on doing about fifty miles before stopping at the sandwich shop about ten miles north of my house. I routinely stop there on my casual bike rides to enjoy a healthy bite to eat before heading on home. Occasionally I opt for the semi-healthy bite to eat if I decide to add a bag of chips to my selection. I guess a lot of that depends on how one looks at healthy and semi-healthy. However - I totally avoid crossing the line to mostly-NOT-healthy by adding a carbonated beverage into the mix or by adding- wait a minute. We got waaaay off track here. I hate to do this to you, but let’s give this article another shot.

I was out riding the other day, enjoying the brisk air and the sunshine along one of my normal routes from my house. I was planning on doing about fifty miles before stopping at the sandwich shop about ten miles north of my house. I routinely stop there on my casual bike rides to enjoy a healthy bite to eat before heading on home. I was about twenty miles into my ride and was just starting to give some thought as to if I would opt for the semi-healthy option to my normal meal at my upcoming rest stop when I saw another cyclist turn off of a side street and head off down the road in front of me. I increased my speed just slightly in order to catch up with him.

Often when I’m out cycling, I run into people I know. As I approached this rider, I couldn't really recognize anything that gave me an immediate clue as to who this person was. The bike was a steel framed beauty of 1970’s manufacture – and in pristine shape I might add. Nothing that I had seen out on the road or in any group rides lately. There was nothing really recognizable about the rider’s clothing – no club or team affiliation, no major ride print on his jersey, nothing – just a plain red jersey, black cycling shorts, white helmet, and of all things, sneakers! – Just your average guy riding his old vintage bike down the road.

But, for just your average guy, he was riding at a pretty good clip. I must admit, it took me a bit of added effort to catch up with him. I slowed just a tad as I pulled up next to him and I turned my head to say hello… 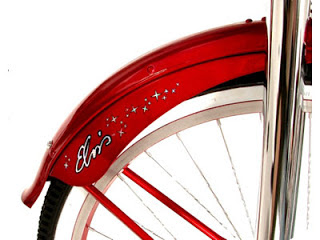 “How ya doin? My name is Elvis,” he replied as he turned his head my direction.

“Nice day for a bike ride, don’t you think? How far ya goin?”

I could not believe my eyes. There I was… out for a routine, casual bike ride… with Elvis. Now, we’re not talking the fat, cape-wearing, rhinestone emblazoned jumpsuit Elvis here. No sirree. This was a trim, lean, healthy (or maybe semi-healthy – depending on your definition), riding-his-bicycle-at-eighteen-miles-an-hour-down-the-road Elvis. This guy was giving me a workout just to catch and keep up with him – and he was wearing sneakers!

I replied, “I was gonna do about another thirty then break for a sandwich before heading to the house. You?”

“Sounds good to me. Mind if I ride along?”

I pulled into the lead and let Elvis draft off of me for about two miles. As I started falling back to tuck in behind him I took the opportunity to ask him, “Hey Elvis, you know, you look pretty trim. Mind if I ask what you did to lose all that weight? You know, I hate to sound tacky, and lord knows that I could stand to lose a few pounds here and there, but you had really porked out there at one time.”

“Well, to tell you the truth,” he replied, “that Elvis wasn't really me. It was a group of impersonators who thought it would be funny. I wanted to take a few years off and I had hired them to fill in. I kinda missed the fine print in that section of the contract that gave them the right to interject a Fat Elvis into the shows. Yes, it was funny for a while but then it got old. There was nothing I could do about it.”

It was at that point that I just threw all care, inhibitions, manners, whatever aside and came right out and point blank asked him, “So… you’re telling me… right now… without a doubt…. that you are not just another Elvis impersonator but that you are… indeed…  the real Elvis?”

He tilted his head my direction, curled his upper lip and said, “Uh huh-huh.” This was just too awesome! I fell on back and enjoyed the draft for a couple of miles.

You know, when you get a chance to meet a real celebrity and they don’t act all snooty with you and stuff, you really want to try and make a good impression. Treat them like a normal person. Not do anything stupid or say something that would put them off. It seemed like there was so many things I wanted to ask him about but then decided against it for just those very reasons. So I just pedaled along, in silence, wondering what kind of small talk we might engage in when he fell back and we were riding side by side again. Then too soon, before I really had much of a chance to truly think about what I might say, he moved to the right and slowed to let me take the lead. As he pedaled along beside me I heard these words come from somewhere – not sure exactly where they came from – but I was almost positive that they came from my very own mouth…

“So… you know… there are an awful lot of folks in the world who think you’re dead!”

If I could have crawled inside my bicycle tire, I would have. Of all the lame things that I could have come up with to say, that was the best I could do? Good grief how embarrassing! Most assuredly, with just a handful of poorly arranged words, I managed to ruin what could have been an exciting new friendship – along with one of the nicest bicycle rides I had been on in a while. He glanced at me with a somewhat puzzled look. I could have died.

“I've heard a rumor to that effect,” was all he said. He kept on pedaling.

After about twenty miles, he pulled up next to me again and asked, “How much farther to that sandwich shop?"

Posted by Freewheelin' Dave at 6:07 PM
Email ThisBlogThis!Share to TwitterShare to FacebookShare to Pinterest