ENJOY THE RIDE – BUT NOT TOO FAST!

On Saturday afternoon, February 4th, we found ourselves traveling north on Interstate 45 on our way to Fort Worth. We had the bikes and cycling gear loaded in anticipation of taking part in the massive Super Bowl Sunday bike ride. The ride in which groups of cyclists from all over the Dallas-Fort Worth Metroplex set out from their respective areas to converge on the West End of downtown Dallas – feast till they’re full – and then ride back to their respective starting points – hopefully having enough time to rest up before partaking in the strenuous activity of watching the Super Bowl and the pre- and post-festivities. Sounds fun, huh?

Yes, and we were quite excited to be heading up there to be a part of that. Excited to be leaving the rain-drenching that had been going on in Houston the last few days and which was being predicted to carry on throughout the weekend. The rain forecast for the Dallas-Fort Worth area for the Super Sunday: zero.

What avid cyclist wouldn’t be eager to get somewhere dry to ride their bikes?

What avid cyclist wouldn’t be happy to finally see clear and sunny skies after making it north of Centerville?

What avid cyclist wouldn’t be thrilled to get free of the Interstate parking lot just north of Corsicana where the freeway expands to three lanes by jumping into that additional left lane and zipping on past all those other motorists who are content with driving right at the posted speed limit or just a hair under?

What Rice, Texas Sheriff wouldn’t be eager and happy and thrilled to see that particular avid cyclist come ripping into his little spot on the face of the earth – at about 11 to 15 miles per hour over the posted speed limit?

It’s really cool how they give you tickets now-a-days. They just walk up to your driver-side window; ask for your license and proof of insurance; ask if everything is correct as well as for your phone number and punch all that information in on their little hand held machine. Then you just scribble your signature on the little machine and he goes back to his car where his little printer has already spit out the 32” long ticket that he shows back up with when he returns to your driver-side window. “Have a good day. Take it easy out there.” No smile. No change of expression. No small talk. 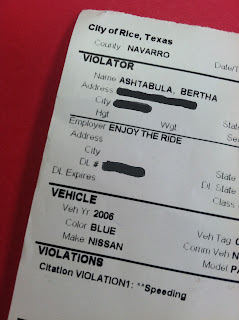 It wasn’t until after a couple of days later, when I decided to take the ticket out of my glove box and look at it, I noticed that our down-to-business sheriff possibly had a sense of humor after all. During the whole ticket-issuing process, he had never asked about my place of employment.  I just imagine that upon noticing the shirts we were wearing, he took it upon himself to make a rather amusing, somewhat double-meaning, assumption.

So, how about that Super Bowl Sunday ride? Well, as promised, it didn’t rain. If it had though, it would surely have been ice cubes!

Enjoy the Ride! – Just not too fast (if you’re anywhere near Rice, Texas)
Posted by Bertha Ashtabula at 11:37 PM
Email ThisBlogThis!Share to TwitterShare to FacebookShare to Pinterest