“OWWW! SON OF A GUN THAT HURT!” …came the outburst prompted by an abrupt penetration in her side. Before those words, or even those thoughts, could be completed the pain repeated itself. Again. Again. Again. “WHAT THE--???”

Even the thicker, protective rubber shell that covered seventy-five percent of her body and kept her from directly rubbing up against the destructive road surface had proven unable to halt the violation of sharp, aggressive end of a thumbtack. With the point firmly embedded in her tender skin as well as the outer shell, there was no escaping the rhythmic, recurring jab, jab jab, jab. All she could do was to bear the pain, slowly but decisively exhale, and wait for the rotation to slow to a stop.

Still cloaked in her normal darkness, she could hear the muted sounds of a frantic rescue effort underway. As she was jolted and jerked and tossed around, she was reassured that help was on the way and this horrible pain would soon come to an end. She heard the exclamation from the other side, “Here it is!”

“OHHHHHMYYYYYGOSHHHHH!” she screamed, as the force of the object being pulled from her skin was just as brutal as it was going in. In a futile attempt to ease the excruciating pain, she pushed all the remaining air from her body – leaving her body completely limp inside the protective shell. On the verge of passing out, she could still hear the muffled, fragmented sentences amongst the members of the rescue crew. “We need to hurry, we’re losing time.” … “Anyone got any CO2?” …“Here. Use these to get that tire off the rim.”  All of the sudden – daylight. Blinding daylight.

She felt a firm grip around her waist- (She thought to herself… “Waist?  Why did I say waist? How do I know that’s not my shoulders… or my hips? No… waist kinda makes sense. I have a valve stem and… other than that… I’m just one long continuous waist…. I guess.") … (It was obvious that she was delirious.) And in an instant, she was yanked from her cocoon. At last, someone will finally attend to her wound.

But instead of the anticipated first aid and urgent attention, she was flung to the roadside while the rescue team focused all of the energy to caring for the outer shell. “Hey! What the heck is going on here? Hey! Down here! What are you all doing?” She watched as they meticulously inspected every inch of the outer shell – inside and out. After giving it a clean bill of health, the rescue team mounted the outer shell back to the inner disc and brought out a brand new 700C and – of all things – installed it nice and cozy into her old place! Right there in front of her – while she watched! The nerve!

The rescue crew tucked the new 700C neatly into the outer shell, hooked her up to some oxygen and brought her to life. “HEY!! I’M THE INJURED ONE HERE – CAN NONE OF YOU HEAR? WHAT ABOUT ME?”

Then, as if her plea had finally been heard, one of the rescue crew-members reached down and picked her up. “Well it’s about time!” But, instead of the TLC that she had expected, she was wadded up, shoved into a stinky back pocket of a sweaty jersey, and jostled around for another hour or so – until she was retrieved and tossed in a box in the back of an SUV.

She finally passed out.

“OHHHHHMYYYYYGOSHHHHH!” she screamed, and then quickly held her breath as she was forced under the surface of the water. What a way to be woke from a deep, deep coma-like sleep. How long had she been out? Where is she? And what the heck is happening now?

Then, as she feels the bubbling sensation near her side, she remembers. It slowly starts to come back to her…. the ride… the pain… the rescue and then the abandonment. How many months or even years ago had that been? Seemed like an eternity.

She feels pressure on her skin as someone makes a chalky mark on her body. (“Gross!”) Then, she is yanked from the tank of water and laid out on a bench to dry. In a few moments a sticky substance is slathered (Again, “Gross!”) across her skin where the tack had once violated her, followed by the application of a small patch of rubber and then an almost unbearable amount of pressure on the wound area. After a few minutes, the pressure is relieved and she is tossed in a pile. 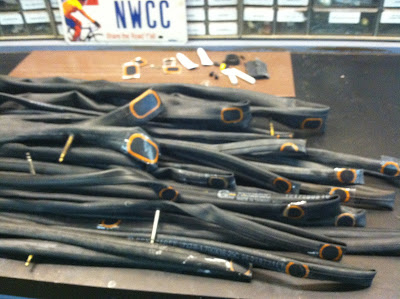 She looks around the pile… there are five or six other 700C’s lying next to her – a couple of pretty good looking ones – a few a little worse for wear. There’s also a few 26ers, two little beefy 20ers and, of all things, a 27er! (Where the heck has he been hiding all these years?)  – all sporting bright, shiny new patches of rubber on their sides (or their waists – whatever).

Posted by Bertha Ashtabula at 11:43 PM
Email ThisBlogThis!Share to TwitterShare to FacebookShare to Pinterest