Of course Uptown Max, was eager to start,
With pastries stacked neatly in the display

In the nick of time as in through the door,
Morning’s first customers, the Rook and Jay.

Then Two Fish accompanied by Miss D;
Some long lost leftover child of the flower;
Young couple whose eyes kept each other’s gaze;
Place was a-hoppin' within the first hour.

Coroner popped in for his usual brew;
Uptown Max looked up, said, “Hey mornin’ Mel!”
Then from the deli, the delivery boy;
An Asian lady with nothing to tell.

Olra rambled on in singing a tune;
A guy from the train went into the Men’s.
But atmospheres changed one-eighty degrees
The very instant the Young Man walked in.

On the southeast side of town, the sagging, wooden leaves of the double-wide garage door started creakily moving in the upward direction with the aid of the automatic opener. The door, as well as the unbearable noise, came to a stop – exposing the gorgeous tail end of a white on white 1961 Lincoln Continental Convertible – suicide doors and all. Within seconds of the garage door halting its motion, the white cloth top of the Lincoln started its routine of lifting loose from the windshield, whirring, folding, grinding, and tucking until it was completely hidden from view beneath the beautiful expanses of meticulously polished and shined sheet metal. Behind the wheel sat Emma. Emma took a scarf out of her purse and wrapped it around her hair – tied it in a knot beneath her chin and backed out of the garage. 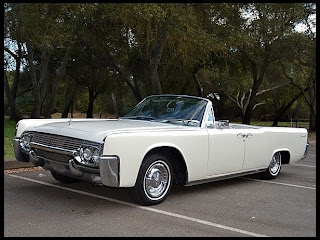 As Emma backed the half-a-century old mechanical marvel and stylish masterpiece down the driveway, she stopped when she reached the sidewalk and pushed the button on the remote control to close the garage door. She then tapped lightly on the horn three times. Before the sound of the third tap had even subsided, the Dwarf emerged from the house next door and, at dwarf-speed, ran across the lawn and jumped in on the passenger side. Emma let her foot off the brake and backed on out into the street. Putting it drive, she drove one block west to the corner and then turned north onto Forest Hill Drive.

Shortly before reaching I-20, Emma pulled into the convenience store parking lot where a woman dressed in a cow suit and a man wearing a big diaper and a Nixon mask were waiting. Emma stopped long enough for them to climb in the back seat of the convertible then she pulled back out onto the street and headed in the direction of the Interstate.

Posted by Freewheelin' Dave at 11:09 PM
Email ThisBlogThis!Share to TwitterShare to FacebookShare to Pinterest