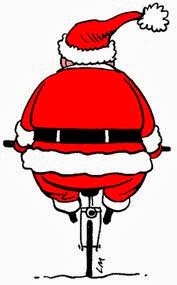 The snow was piled three feet high on both sides of the road that led from Bugstussle’s General Store back to Sidney’s and  Kris’ workshop – a five-mile journey that predominately followed the banks of Clement Moore Creek – a creek which was predominately covered with a good fifteen-or-so inches of ice this time of year. Neither the snow, nor the ice, nor the time of year did little to stop Sidney and Kris from their daily ritual of racing their bicycles into town for supplies and then back to the shop. Even on those days when they didn’t really need any supplies, they would make up some story to tell their wives that would allow them to escape and to let off a little steam, enjoy some fresh air and, for just those few moments, set their normal work obligations aside.

Sidney Carpenter was employed at the Kris Kringle Christmas Workshop just outside the city limits of North Pole. Coincidental to his surname, he was the Chief Carpenter – and partner, albeit only a forty percent partner. The sixty percent portion belonged to Kris – only because it was mostly his inheritance that provided the investment capital that purchased the land and the building that was now the hustle-bustling industry that manufactured toys for children around the world. But aside from the offset percentage of the business, Sidney and Kris were equals in every other respect. They were born just a few hours apart at the same hospital in the center of North Pole; had the same teachers from Kindergarten through 12th grade (okay – mainly because there was only one teacher in North Pole for about forty years in a row!); took the same mail order college courses majoring in business administration; and, of course, grew up together riding their bicycles in the snow and along the frozen banks of the Clement Moore Creek. It was only fitting that on that Wednesday afternoon back on the 17th of February in 1802, sitting at the lunch counter of ol’ man Dicken’s Drugstore, those same two young lads, with their brand-spanking-new college degrees and with pencils and a stack of napkins in hand, sketched out an entire business plan for a factory that manufactured  toys year-round and then devised an amazing shipping program that would distribute the entire lot to children around the world – during one single evening. It was an undertaking that no one had ever tackled before.

Ever since Sidney could remember, he had a knack for building things. No scrap of wood was ever wasted around him – it was easily transformed into a toy or some useful object. Because of this knack, he was the obvious choice for the position of Chief Carpenter. Kris was the one that had always been good at numbers and organization, so figuring out how much of what to build and who gets what and where it all goes was left up to him. Manpower around North Pole wasn’t an issue – not since the short-lived Ice Factory closed down. We won’t need to go into a lot of detail about that ill-fated venture other than to say that the guys that sketched THAT idea out on napkins had some pretty bad lettering skills and all of their 9’s looked like 4’s and their 8’s were sloppy and easily mistaken for 3’s. So as it turned out, when they had their factory built, all of the ceilings were hideously low which forced them to advertise for workers of a slightly smaller stature than the average North Pole resident. Fortunately these working conditions were ideal for Elves worldwide who felt lost inside average-sized structures and they migrated by the trainload to North Pole. Unfortunately they were all unemployed and drawing welfare within a year after relocating. Fortunately Sidney and Kris were up and running strong by the summer of 1803 and the Elves were all gainfully employed and once again singing-while-they-worked twenty hours a day building toy after toy after toy and preparing for a Christmas Eve delivery. 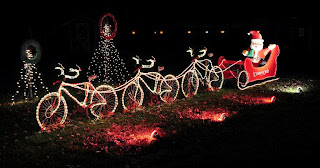 But the real genius behind Kris’ and Sidney’s operation was in the Shipping and Distribution Department. Both had been avid cyclists since they were in their elementary years of school and they were both on the cyclo-cross and mountain bike race teams in high school. Because of this, they easily recognized the reliability and efficiency of the human-powered two-wheeled machine. Realizing that they would be required to make thousands of deliveries over the course of one night, speed was obviously going to be crucial. Since there had also been several non-Elves laid off by the Ice Factory, they were hired and trained to race bicycles. Sidney devised a gearing system to drastically increase the speed of their race bikes as well as a harness which would link twenty of them together. With twenty super-fit cyclists pulling a sleigh full of toys, there should be no problem making all of the deliveries in one single night.

And for twenty-two years, there wasn’t.

Sidney and Kris rounded the last curve alongside Clement Moore Creek – Kris riding low on the inside to get the edge on Sidney and sprint ahead just in time to make the left turn at the entrance to the factory. As they raced up the drive and towards the Sleigh House, they saw Clyde Cratchit standing at the opened door – a bewildered look on his face and a limp bicycle tube in his hands.

“Couple a-the derndest things I ever seed,” drawled Clyde as Sidney and Kris rolled on in through the doors.

“Busted valve stem. Snapped right plum off at the base,” replied Clyde.

As Sidney walked over to the supply cabinet at the back of the Sleigh House he said, “That happens now and again Clyde. No big deal – I’ll just grab a spare tube.”

“Well now, Mister Sidney, that there’s one a-them derndest things I was a-referrin’ to. Ain’t jest this one tube with the busted valve stem. Outta the forty wheels on the drive bikes, twenty-nine a-thems got busted valve stems. Snapped right plum off at the base.”

“HEY! There aren’t any spare tubes in the cabinet!”

“That there’d be the other derndest thing I was a-referrin’ to Mister Sidney.”

Now, changing 29 tubes in less than a day wouldn’t necessarily be labeled as an impossible task in any way, shape or form. It would definitely help the situation though if there were at least some spare tubes in the supply cabinet. Chalk that up to some sort of a major glitch in the min-max levels of their inventory program. The real kicker in this situation: Vic, the owner of the North Pole Bike Shop closed at noon earlier in the day so he could catch the two o’clock train out of town – spending the holidays with his daughter and grandkids down in Tacoma. Things were looking a fairly deep, dark shade of gloomy.

Several hours later, Sidney and Kris were sitting at the kitchen table – pencils in hand and with a stack of napkins. Trying their best to come up with a plan – but nothing. Earlier, Mrs. Kringle had cooked a couple of TV dinners and had prepared a huge pot of coffee. She knew that the guys were in for a long, long night of brainstorming.

“Anything yet?” questioned Kris.

“Still a blank,” responded Sidney – elbows on the table with his arms supporting his head – eyes and forehead sunk deep into the palm of his hands.

Looking at the clock on the wall, Kris wearily announced, “Man, it’s nearly five AM. I’ve got to get some sleep. I’m supposed to hit the road in about ten hours.”

“Don’t worry. I’ll come up with something before you need to leave. Go on to bed – I’ll see you when you wake up.”

Kris got up, took his dishes over to the sink then, just before he tossed the plastic dinner tray in the garbage can, said, “You know one thing that puzzles me?”

“Why do they call these things TV dinners?”

“About danged time you got your lazy hiney out of bed!” kidded Sidney as Kris staggered down the stairs into the living room.

Kris, tossing his bright red coat across the back of the couch, walked toward the kitchen door and replied, “I couldn’t figure out what to wear. Is there any coffee?”

“Get your coffee and meet me and Clyde out in the Sleigh House. You’re gonna love this!”

“What the heck!” cried out Kris as he entered the Sleigh House – stopping dead in his tracks – eyes fixed on his sleigh parked just beyond the ear-to-ear grins on the faces of Sidney and Clyde.

“Whaddya think?” inquired Sidney.
Kris slowly took in the entire view of the Sleigh House – from one side to the other. There, leaning against the left wall, were the twenty bikes with their multitude of flat tires and all the rigging. As he scanned towards the right, his sleigh – all loaded down with the evening’s delivery. Continuing to scan to the right and in front of the sleigh was the new drive train—and of all the unlikely things – eight reindeer!

“I’m a little confused,” shuddered Kris. “I mean – I have no doubt that these reindeer can pull my sleigh but – there’s no way that they can maneuver through the streets as fast as our twenty bicycle riders.”

To which Clyde was quick to respond, “Mister Kris, this here be one of the most derndest things I ever have seed. THESE HERE BABIES CAN FLY!”

Kris climbed aboard the toy-laden sleigh and Mrs. Kringle handed him a thermos of coffee. Sidney and Clyde tightened the straps across the bags of packages on the back of the sleigh. The Elves and the twenty (soon to be once again unemployed ) bike riders lined both sides of the drive just outside the Sleigh House doors. Kris released the brake, snapped the whip then shot out of the Sleigh House like a rocket. Just as Kris reached the end of the drive and the sleigh took flight, he was heard to exclaim... 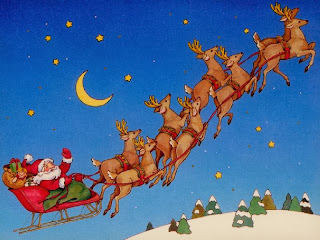 “THIS HAIR-BRAINED IDEA OF YOURS SURE BETTER WOOOOORRRRRRRKKKK!”

Posted by Bertha Ashtabula at 1:31 PM
Email ThisBlogThis!Share to TwitterShare to FacebookShare to Pinterest