Most times, I set out on a bike ride just to escape – be one with my thoughts – not really expecting anything out of the ordinary to happen at all.  A few evenings ago, I had exactly one of those kind of times – just me and my bike heading down FM-2920. 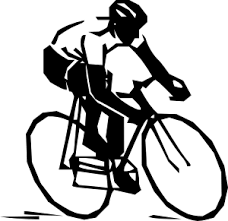 FM-2920 between Spring and Tomball has four lanes of fairly fast traffic – but it also has some very wide shoulders and, for the moment, it has some nice long stretches between traffic signals. Typically the shoulders are free of debris. So, except for the occasional motorized vehicle that invades my comfort zone while it makes a last-second right turn directly in front of me, it’s not a bad escape route out of the north part of the big city – and a good area to run across other like-minded cyclists quite often.

But back to a few evenings ago…  I was heading west and just approaching the north end of Hooks Airport when I caught a glimpse in my rear view mirror of a rider, still far behind me, seemingly approaching with a great amount of speed. I glanced down to check my own speed – 17 miles per hour.  Maybe I’ll just kick it up a notch.

I wound my way through the detoured lanes of the construction where the new toll road will cross – the newest section of our Grand Parkway – hitting the light green, I was able to keep my speed right at eighteen. Once through all of that and a few hundred yards beyond, I glanced in my mirror – the traffic light had brought my pursuer to a temporary halt. Standing up on my pedals, I picked it on up to twenty. Twenty-one. Twenty-two. Let’s see if he can catch me now.

I hit the slight downhill of FM-2920 and coasted a bit with my computer showing my speed right at twenty-four. Took a quick check in my mirror. Sure enough – he’s still back there – and rapidly gaining on me. I looked in my mirror again – taking a few seconds to try and focus on the approaching rider. Although I couldn't really make out much detail, he seemed to be a pretty big guy. Now, I wasn’t on a real steep downhill but his size would still give him an advantage and he was already zeroing in on me with considerable speed. I put everything I had into my pedals and by the time the road leveled out I was steady at 30 mile per hour. Another look in my mirror. Back at the road in front of me. Back to the mirror. The road. The mirror. Each time the rider behind me was appearing closer and bigger. And I really mean BIGGER!

The traffic lights were being kind to me – each one green as I made my way down the road. I had only slowed to 27 but I had accepted the fact that this guy was going to catch me. Another glance to the mirror—what? Wait a minute. Although the reflection was dark and still not very clear, it was obvious that it was too big to be just one big guy chasing me. It kinda looked like maybe it was two big guys – on a tandem. No wonder they were approaching me with the force of a locomotive! With just a couple of miles to go before I would make the right turn on FM-2978, I relaxed a bit and slowed to 25 – which was waaaaay faster than I even needed to ride but I didn’t want to appear too wimpish when these guys blew past me and left me in their dust.

With a steady pace, I reached down to grab my water bottle. Took about four long drinks – silently cursing myself when I realized that I had ridden eleven miles already without a single drink of water. I usually try to drink every five miles. I put the water bottle back in the downtube cage. I could sense the tandem riders right on my tail. Returning my hand to the handlebars I shifted my gaze back to my rear view mirror. Nothing. And by nothing, I mean nothing – completely black! I was riding into the sun so it shouldn’t have been black in my rear view mirror. I turned my head slightly to the left, looking back over my shoulder. I could just barely see the front wheel of the tandem. I could hear the heavy breathing of the riders. My body could actually sense their approach. Strangely enough though, it felt more like the sensation of an approaching eighteen-wheeler – not two big guys on a tandem. Not knowing how else to explain it, as every hair on both of my arms started standing on end, I was getting the distinct feeling that something was very, very wrong on the shoulder of FM-2920 that evening. I didn’t even have to glance in my mirror. I could feel that there was nothing in it but blackness.

Three maybe four seconds later (which actually seemed more like days), the tandem was pulling up beside me. But really, it was more like a massive darkness completely enveloping me. Usually at this point, I’m ready to turn and greet my fellow rider(s) with a cheery, “How ya doin’?” or something similarly Texan. But on that day and at that particular moment, my body was so petrified with fear I couldn’t get anything to move except my legs on those pedals. All at once I heard a bellowing voice split the tense silence with, “On your left.”

It was at that exact moment I was snapped back into the familiar, friendly world of cycling and I turned my head to the left and said, “Thanks. How ya d—." Instantly my mouth froze in a wide open position and my eyes popped so far out of my head that they knocked my sunglasses off. The hairs on my arms, that for a split second had started to once again relax, completely bailed on me and fell to the roadside. All at once I had found myself within arm’s reach of the biggest – hairiest – blackest – hairiest (oh, I already said hairiest, didn’t I?) – baddest looking spider I had ever seen in my life.

I kid you not.

This spider was huge. Its body was perched across both seats of the tandem – its four legs on the pedals just a-pedaling like crazy – two legs on the back handlebars and two legs on the front handlebars. The top of this spider’s head was towering over me – at least ten feet above the surface of the road. And there we were – side-by-side – cruising down the shoulder of FM-2920 at 25-or-so miles per hour - me and the overgrown hairy spider on a tandem. For a moment I was at a loss for words so I just decided to carry on with the sentence I had already started.

“Not bad,” replied the spider. “It’s an awesome day for a ride.” He flashed a huge spider smile and then said, “Catch you later.” He then pedaled on down the road and turned right at FM-2978. I slowed to seventeen. 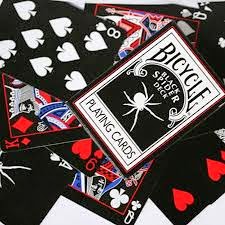 You know – most times, I set out on a bike ride just to escape – be one with my thoughts – not really expecting anything out of the ordinary to happen at all.  Sometimes I just ride and find myself wondering. Wondering things like what it really means when a gigantic spider on a tandem says to you, “Catch you later.”

Posted by Bertha Ashtabula at 9:26 PM
Email ThisBlogThis!Share to TwitterShare to FacebookShare to Pinterest