My First MS-150 on a Tandem - by Bertha Ashtabula

This time of year – Houston to Austin MS-150 time – I am always reminded of back in the mid-90’s when I decided that I was going to do the ride on a tandem. I had ridden it on my single bike the two years prior and I didn’t fare too well. But then again, not too bad considering I rode it on my Schwinn 6-speed Cruiser Deluxe. I referred to those years as my MS-60 years – because that’s about how many miles I rode each year – total for both days!

Anyway, I was determined that I was going to actually complete the entire ride that year. I was positively certain that it was my bike that was the culprit for my prior failures. I definitely needed something with more gears.  Six just wasn’t cutting it. By my reckoning, six gears were getting me about a third of the way through the journey, so in order to complete the entire 175 miles, I was going to need at least 18 gears. And with that mathematical philosophy in mind, I set out for my local bike shop to find a replacement for my trusty Cruiser Deluxe.

I walked down the aisle of the bike shop – looking at the road bikes, the mountain bikes, the hybrids – all with a healthy amount of gears to pick from that could easily satisfy my need. I had pretty much decided that I was going to purchase one of the comfy looking hybrids when all at once my gaze was drawn to the corner of the shop – and there it was – hanging by its rear wheel from a hook in the ceiling – beckoning me to come closer. The bright red Schwinn DuoSport tandem bicycle – complete with 18 awesome looking gears!  Once again doing some quick math in my head – if 18 gears will get me through the additional 66.667% of the course, two drive trains should get me through it twice as fast. Basic math – right? I bought the bike right then and there.

Next obstacle: Find someone willing to ride it with me.

I won’t mention how many people I asked who not only turned me down on the offer, but were able to turn me down while A) laughing hysterically; B) trying desperately to control their laughter while at the same time trying to think up some nice story to tell me as to why they couldn't; C) shooting coffee out of their nostrils and D) dodging me for days on end because they had already heard that I was wandering around looking for a tandem partner for the MS-150. Those reactions pretty much applied to everyone except Danny Downtube.  Danny had just returned to the office from being on a two-week trip to Southeast Asia and was still suffering a little from jet-lag when I caught him at the coffee bar during our morning break. I remember being shocked when I asked him if he wanted to be the stoker on my tandem bicycle for the MS-150 trek to Austin and he immediately replied that he thought it would be a great idea. (Although he did confess to me a few days later that he swore I had asked him if he wanted to play some poker and make a random mess with ice cream on the 1:50 train to Boston – which made absolutely no sense to me whatsoever but then you gotta remember that the guy was still a little jet-lagged – not to mention sort of a dufus. But hey, he said yes – and he was honorable enough not to change his mind once he actually understood what it was that I had asked him to do.) 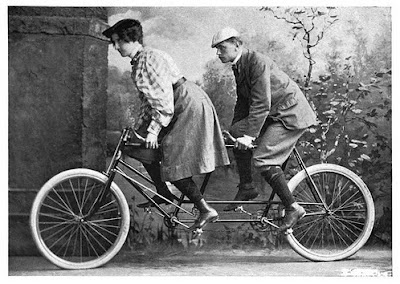 Finally, the big day arrived and Danny and I showed up at Tully Stadium ready for our tandem journey to Austin – and I with high hopes of finally making it all the way there without riding in a SAG wagon. I had done the math. I had increased the gears. I had doubled the horsepower. Danny and I had trained on the tandem and we were like a well-oiled, smooth-running, fine-tuned cycling mechanical marvel. Okay, well maybe we forgot about that part. I mean, I’m sure we could’ve been a well-oiled, smooth-running, etc, etc, if we would have remembered to do the “training on the tandem” part. But you know, he was not available when I wanted to ride and I was busy doing other stuff when he had time to ride not to mention we each had our own favorite TV shows that we had to watch – and I mean, really... what’s the big deal about riding a tandem? It’s just a bicycle – right?

So anyway, as it turns out – Day One of the MS-150 and Danny and I have absolutely zero training miles on the tandem together. Danny thinks that he is going to be the captain and that I’m going to ride in the back as the stoker. I set him straight on that right away. His only argument being that he is the man and “the man is the Captain!” I quickly informed him that it was my tandem and that he agreed to be the stoker regardless of what he thought I had originally said. Plus, at the time, I outweighed him by about 75 pounds (yes, I was quite a bit heftier back in those days) and I convinced him that the International Tandem Rule Book dictated that the heavier person, whether they be male or female, needed to ride in the front and be “The Captain.” (And he bought it. Enough said.)

After a good night’s rest and a fabulous pancake breakfast, Day Two was off to a good start. Danny was getting more comfortable and accustomed to his role as The Stoker on the back of the tandem. As The Captain, I was realizing what I needed to call out in order to communicate to The Stoker, who can’t see most of what is coming up because I, The Captain, am blocking his vision. We both are learning to communicate little things we take for granted when we are riding our single bikes – like coasting, raising up out of the saddle to stretch, and even changing gears. We were getting there. Still a little rough at times but a major improvement was noticeable within just a few miles from the Day Two start.

Things continued to improve until we found ourselves coming up to – The Smithville Hill. We’re not talking about an uphill here – we’re talking one heck of an exhilarating downhill. I had done the awesome downhill of the Smithville Hill on my Cruiser before and it was a blast. I couldn’t wait to see what kind of speed we could reach going down that thing on a tandem. As we approached, I picked up the pace. Danny, strictly from sensing my increased effort, started pouring on the power. By the time we were starting the steep decent, we already had the tandem at about thirty miles per hour. Then we really started accelerating!

I had already shifted into the highest gear and I was not letting up on the pedals.  I kept them spinning faster and faster to keep up with the increasing speed. Danny, behind me, still giving it everything he had – but obviously oblivious to what was still to come. In fact, it was probably about the time that we were just hitting 80 miles per hour that Danny must have peered around my shoulder and caught a glimpse of the expanse of downhill still in front of us – because that’s about the time I heard him scream, “BERTHA! Slow this blankity-blank bicycle down RIGHT NOW!”

But hey. I am The Captain!

And as The Captain, I kept the power to pedals. The computer on the handlebars flashing the numbers: 81, 82, 83, 84, 85 as quickly as counting off seconds. 86, 87, 88, 89, 90. Ninety! We were doing ninety miles per hour down Smithville Hill on the tandem! We were flying past every other cyclist on the course. I could feel that Danny was fighting the pedals as he was screaming his fool head off – but I wasn’t about to let up. It took a couple of seconds but we hit 91 then 92. After a few more seconds, 93. Then finally, 94 showed on the computer readout.

It was precisely at 94 miles per hour that Danny discovered the brake cable running along the top tube of the tandem that operated the rear brakes. Without letting up on his insane shrieking, he reached down with both hands and pulled as hard as he could on the cable. The rear brake pads immediately engaged against the rim and started slowing the bike. There was nothing I could do about it – he had seized control of the rear brake. I started fighting the handlebar to control the bike. Danny was like a madman on the back – pulling harder and harder on the brake cable. The brake pads were squealing almost as loudly as Danny. Smoke started streaming from the rear wheel. Within a matter of seconds, the squealing rubber started to sound more like the scraping of rocks against metal. The heat from the pressure on the brakes had morphed the rubber brake pads into sold rock. Sparks were now flying around the rear brake calipers. The bicycle had slowed to approximately 40 mph when the rear tire caught fire – which, in turn, caused the bag on the rear rack to catch on fire – which, in turn, set Danny’s jersey on fire. As we slowed to about 30, the rear tire blew out. At that same moment, Danny unclipped and went flying off the back of the bike, doing 30 mile per hour cartwheels and somersaults in the ditch alongside the road until he finally collapsed to a stop in a mud puddle that was just wet enough to cause his fire to fizzle out. Meanwhile, I was still battling the tandem and trying to regain control while at the same time I had a burning glob of rubber with rocks for brake pads on the back wheel fighting against me – not to mention two big tubes of Chamois Butt’r and a container of sun block fueling the fire inside the burning rear bag.

I’m almost 99% positive that the SAG wagon driver at the bottom of the hill who had stopped to help a rider with a flat tire never knew what hit him.

And that, dear readers, is the exciting tale of my first MS-75 - on a tandem.

Posted by Bertha Ashtabula at 11:44 PM
Email ThisBlogThis!Share to TwitterShare to FacebookShare to Pinterest