Young John Waldenthrottle rode his J.C. Higgins ten-speed bicycle down Louetta Road, headed toward his house after having just left the roadside submarine sandwich wagon at Ella Boulevard. About half a mile into his homeward journey, two other gentlemen, dressed all in black and riding bicycles, exited from a side street and ended up riding abreast in front of him. Each of the two riders had shovels and pickaxes on the racks on the back of their bikes. Young John was quick to catch up with them and strike up a conversation.

“Hello,” he began, “My name is John Waldenthrottle. Most people refer to me as Young John. Not that I’m really all that young any more – but I used to be.”


The two gentlemen turned in unison, glanced back at Young John Waldenthrottle, nodded their heads, and likewise in unison said, “Good afternoon Young John - pleasure to make your acquaintance.” Then they turned back around to pay attention to the road before them.

Young John continued, “So what kind of uniforms are those that you are wearing? I’ve never seen uniforms like that.”

Without turning to look back at Young John, the man on the left replied, “Well Young John, these really aren’t uniforms. We just choose to wear matching black slacks and matching black long-sleeved shirts with black neckties. We think it makes us look kind of cool – in an almost creepy sort of way.”

Then the one on the right chimed in, “My name is James. That’s my brother Albert. We’re grave diggers. And Albert's right, we think we look cool dressed like this – in an almost creepy sort of way.”

Then, as if on cue, all three of them said, “In an almost creepy sort of way.” Then they all laughed together and pedaled on down the road.

Meanwhile, out on the west side of town, Carl was enjoying the early-afternoon sunshine of his day off. Carl had been among the first group of employees to be hired by Subs-R-Us, a mobile submarine sandwich wagon company formed back in the late 90’s. He had started out kneading the dough for the bread at the downtown kitchen and then gradually worked his way up through the ranks to his current position – North Houston / Spring / Woodlands District Manager. Occasionally, once a month at the most, one of the normal wagon workers under his charge would need an emergency day off or something and Carl would typically take their place running their wagon in their absence.

But this particular day happened to not be one of those days. In fact, it happened to be one of those weekdays that Carl didn’t have to even go to work at all because he had decided to take a personal day off. And he had taken a personal day off for two reasons. Reason Number One: He had his annual checkup scheduled for that morning – which he had gone to – and in which he was declared as being in exceptional health for a man of his age although he was told that he could stand to lose a few pounds. (But don’t they almost always give that advice?)  Reason Number Two: He wanted to visit his parents’ grave-site out at Resthaven Cemetery in the afternoon. 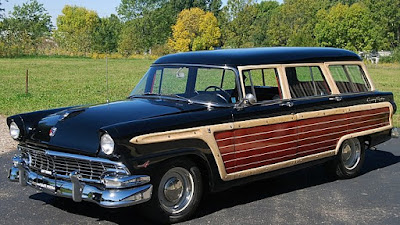 Carl drove to the cemetery in his classic 1956 Ford Country Squire station wagon. (Or as he liked to call it: his inheritance. He called it that because that’s all his parents left him when they died during a fast food establishment robbery gone wrong back in 1991. No, they weren’t the ones robbing the place. They were just the ones unfortunate enough to be the actual customers next in line behind the would-be robber who was holding his gun against the forehead of the clerk standing at the cash register when the bumbling, near-sighted cook came bursting through the double-swing kitchen doors firing his automatic rifle in a fit of anxiety or heightened adrenaline levels or something, and mowed all four of them down in a matter of seconds. It was in the news for weeks - cook kills robber along with co-worker and two innocent bystanders - the most exciting thing to happen in Marietta, Oklahoma in decades.) Carl parked alongside the road at the end of the row where his parents were buried and then walked the short distance to their graves. Standing in front of their headstones, he knelt down and replaced the weeks-old, withered flowers with the fresh ones that he had brought. He paused there a few minutes – not saying a word – just being an only-child visiting his parents and silently recollecting the good times of years long past.

After a few minutes, Carl stood up and headed back toward his car. He was about twenty feet from the Country Squire when he heard a strange noise coming from the woods off to his right. He stopped, turned his gaze to the tree line approximately a hundred yards away, and then began walking that direction to check it out.  As Carl drew nearer, the noise became a combination of demonic laughter, high-pitched shrieking, guttural growling and indecipherable babbling. Becoming more than a little too eerie for Carl, he stopped. He was about to turn around and head back to his car when all of the sudden he sensed movement from behind the trees. Before Carl could even think another thought, three women emerged from the woods. Three hideous women with horrid fangs, skin of scales and grotesque, venomous snakes instead of hair. It was the Gorgon sisters – Stheno, Euryale and Medusa.

Carl took one look at the three sisters... and turned into solid stone before he hit the ground.

So much for a clean bill of health from the doctor.

So much for losing weight.

Posted by Bertha Ashtabula at 12:00 AM
Email ThisBlogThis!Share to TwitterShare to FacebookShare to Pinterest