Riding with Max the Cocker Spaniel

Young John Waldenthrottle rode his J.C Higgins ten-speed bicycle down the road with his new friends Albert and James, the gravediggers. He had originally planned to go home to eat his cold cut combo on wheat with pepper jack cheese, lettuce, tomatoes, black olives, banana peppers and healthy helping of spicy brown mustard but he had met up with Albert and James and found them to be a quite interesting pair of gents, to say the least, and so decided to alter his previous agenda. After all, the afternoon was early and there really wasn’t much he felt like doing around his apartment anyway. His television was broken, which really didn’t matter because his power was turned off two days ago and he couldn’t plug in his extension cord at his next door neighbor’s apartment until she got home around five thirty. Besides, Albert and James had suggested that he might enjoy riding out with them to the cemetery and see how they go about digging a grave. He gladly agreed to their kind invitation as he rode right on past the entrance to his apartment complex.

Resthaven Cemetery was a forty-five minute bike ride past Young John’s apartment. He figured he could hang out with Albert and James for a couple of hours then have plenty of time to ride back home before it got dark. The journey was fairly uneventful and Albert and James weren’t either one much on conversation – minimal verbiage, basic fact, to the point, men of very few words. But Young John found them kind of cool. (He started to say to himself, “in a creepy sort of way” – but he didn’t.) So he just rode along behind the brothers riding two abreast in front of him – predominantly in silence.

As they rode up the slight incline about a quarter of a mile from the cemetery entrance, James veered closer to the right edge of the shoulder while Albert simultaneously veered to the left, almost into the actual traffic lane. They both pointed down and slightly ahead into the now widen space between them and in unison called out, “Road kill!” Young John also veered to the right as all three of them rode past the armadillo squished on the pavement then on up to the entrance to Resthaven Cemetery. The trio made the right turn through the gates and then took the first turn to the left to head down the hill toward the caretaker cottage. Melvin Curtis, the groundskeeper, having already seen the approaching bike riders through his office window, grabbed his clipboard off the hook behind his desk. He then walked out onto the cottage porch and a few steps down the sidewalk to greet them.

“Lovely afternoon,” Melvin called out as Albert, James and Young John brought their bikes to a halt.

“Yep. Sure is.” (The minimal verbiage, basic fact, to the point, in unison reply from the brothers.)

“Yep.” (The brothers once more in unison.)

“Sad thing about that one,” he said as he shook his head. “Never did find the body you know. Here – I need one of you to sign this form – as usual.”  He handed the clipboard to Albert and with his other hand patted his shirt pocket a couple of times. “Aw heck!  I don’t have a pen. Any of you got a pen?”

Young John piped up, “Oh hey! I’ve got a pen. I got a whole box of pens here in this paper sack on the back of my bike.” Then he reached into his bag of office supplies, retrieved a pen and handed it to Albert, who, in turned, signed the form on the clipboard and handed it back to Melvin.

Melvin took the clipboard, gave it a quick glance then said, “Looks good. It’s plot K174. Back up the hill and then to the left six rows. It’s not too far.” He put the pen in his shirt pocket.

James, Albert and Young John turned their bikes around and started back up the hill. About that time, a Cocker Spaniel darted out of the cottage door and went chasing after the bicycles.

“Max! Get back in that house!” commanded Melvin. The dog abandoned the pursuit, turned and ran back into the house. Melvin followed him in and shut the door.

The trio continued on up the drive, turned left at the main road, went the six rows over, then got off of their bikes and walked them down the row of headstones until they got to plot K174. James and Albert unhooked their pickaxes and shovels from their rear racks then started outlining in the grass where they were going to dig. Meanwhile, Young John opened the sack on the back of his bike, extracted the cold cut combo on wheat, walked over to the large oak tree about twenty feet away and sat down to eat his sandwich as he watched the brothers go about their work.

Young John was about three-fourths of the way through his cold cut combo when a voice called out from behind him saying, “Hey, young man! Do you think you could help me?” 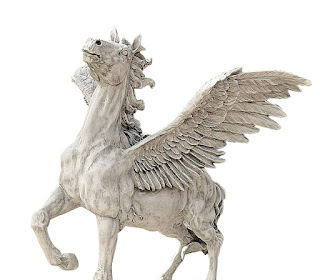 Young John stood up, turned around and found himself looking straight into the eyes of the winged white horse, Pegasus.  He replied, “Uh, help you with what?”

“I am trying to find my mother. I heard that she might be around here somewhere.”

Posted by Bertha Ashtabula at 12:10 AM
Email ThisBlogThis!Share to TwitterShare to FacebookShare to Pinterest