Riding with a Can of Transmission Fluid

Making contact with Medusa, Cyclops wrapped both of his hands tightly around her neck and lifted her straight up off the ground. Their eyes locked together.  She was waiting for the transformation to start – the transformation that would turn her attacker into a helpless slab of rock. Cyclops, keeping his left hand securely wrapped around her throat, moved his right hand down and brought it around behind her. She started gasping for air – wondering why this creature was not turning to stone. Cyclops began pushing and twisting his arms with such force that her backbone would surely break under the pressure. He had conquered worse than her with his bare hands before. Face to face, their eyes never losing contact with each other. Medusa’s neck was twisted so far to her right that she felt that at any moment she would hear it snap. Their eyes, their lips within inches of each other – she could feel his beer and fried chicken breath on her face. Medusa, near helpless in his arms but still determined that she could get him to turn to stone at any moment, was on the brink of passing out when… Cyclops loosened his grip around her throat, brought her lips to his and kissed her.

He continued to look into her eyes and, now cradling her in his massive arms, he kissed her again.

As the tension rapidly drained from each of their bodies, violence turned to kindness; war turned to peace; anger turned to calmness; aggression turned to compassion – and then the physical metamorphosis began. Medusa’s skin started to lighten and smooth, scales began to disappear. Her fangs retracted and her hands, which were once claw-like and grotesque, became soft, gentle and petite. One by one, the snakes began to die and fall from her head until she was totally bald – the full moon shining brightly on her bare scalp.

“Hmm,” said the Cyclops. “I think that look becomes you!”

“I'm thinking I might want to get a wig,” replied Medusa. She started kissing him again.

Behind the caretaker’s house, next to the patio, the lid on one of the trash cans lifted ever so slightly – just enough for two eyes to peer out to see if there was any sign of World War III or maybe even Armageddon.  Other than what miraculously seemed to be a still, peaceful night, the only thing that appeared to be a little out of the ordinary was the statue of the Manticore sitting in a lawn chair with a box of fried chicken on its lap. Young John was about to crawl out of the trash can when suddenly the stone Manticore twisted its head as if to pop the muscles in its neck and shoulders.

“Ahhhh! That feels better,” said the Manticore with a raspy, crackling voice. Then little bit by little bit, the Manticore gradually started to lose its stony appearance as the flesh and hairy exterior covering started to reappear. He took a piece of chicken out of the box and bit into it. As he was chewing, he glanced toward Young John peering over the top of the trash can and said, “How long have I been asleep?”

“I’m not really sure,” answered Young John. “But I know it was about eleven or twelve hours ago that I saw you leave that cold cut combo at the sandwich wagon.”

“No wonder I’m so hungry,” he replied as he took another bite of the fried chicken. 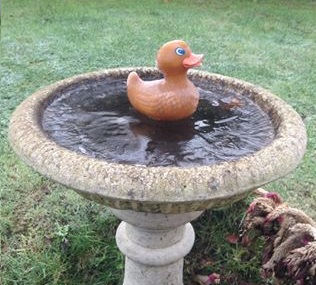 Out on the front lawn, Max suddenly sprang back to life and immediately ran over to Melvin and started licking his stony face – eyes, mouth, nostrils – the works! James and Albert gradually started moving about over at their scene of disaster. The duck’s legs started twitching as its body returned to the living and breathing world. Albert lifted himself off of the bird bath and stood up. James started kicking at their bikes in an attempt to work himself free.

“OH GOOD GRIEF, STOP THAT!” shouted Melvin as he reached up and knocked Max away from his face. He pulled his feet free from the John Deere, stood up and started taking in the scene around him - wondering what all had happened while he was out.

At about that time, Young John and the Manticore came from around back. Young John, looking over at Medusa and Cyclops still lip-locked together, hollered, “For Pete’s sake – get a room!”

As they all were standing in the yard, checking themselves over – feeling to make sure that flesh was flesh once again; elbows and knees and such moved properly once again; and that everything was back to the way it was supposed to be – Agnes, Vera and Pegasus came walking down the path. “What the heck happened?” they started asking.

Young John stepped up and, pointing toward Cyclops and Medusa, said, “Well, she turned the duck to stone and then Cyclops attacked her. After that, I’m not really sure what happened.”

Medusa chimed in, “Apparently, I was unable to concentrate my power toward someone with only one eye. I tried as hard as I could but he just kept staring right at me with that single eye - like he was looking straight through me and – and my powers were absolutely useless. All my life, I’ve only ever turned creatures with two eyes into stone. I really thought I was about to die and then - he kissed me." She glanced over at Cyclops with a loving look on her face and she said, "He kissed me and the horrible spell was broken.”

Then everyone, all together, “Awww!”

Once everyone was back at the pavilion, they were able to push Agnes’ car out of the flower bed and get it started. The front grill and hood were a little dinged up but it was still driveable. Agnes and Vera offered the Manticore a ride and the three of them took off for town. James and Albert got their bicycles untangled and, after a quick check, determined that no mechanical damage had been done. Cyclops was planning on hanging out at the pavilion for a little bit with Medusa and Pegasus so Young John got his bike ready to ride back to town with Albert and James. As Young John was getting ready to mount his J.C. Higgins ten-speed, Cyclops walked over to his Schwinn Varsity to get something out of his rear bag.

“Here little buddy, catch,” said Cyclops. With that, he tossed a can of transmission fluid over to Young John Waldenthrottle.

And everyone lived happily ever after – well, maybe everyone except for Carl. They had all sort of forgotten about Carl Simpson. That was probably a real bummer to come back to life temporarily only to find that you’d been locked in a coffin – and chopped into two pieces, no less.

The next morning, all was peaceful once again at Resthaven Cemetery. Melvin and Max got up early and ate a hearty breakfast. Afterward, Melvin went out and started working on the John Deere mower for a little while before he had to go unlock the gates at eight o’clock. About thirty minutes later, people started arriving for the graveside services of Phil the Groundhog.

And with that, we answer the previously asked question,
“Who is that buried in Phil’s grave out at Resthaven Cemetery?”

Oh? You missed that question?
Then you need to read…