Riding with Cyclops and the Duck

Young John Waldenthrottle rode his J.C. Higgins ten-speed bicycle as fast as humanly possible down the tree-lined road and past row after row of assorted headstones as he made his way toward the main gate of Resthaven Cemetery. After passing between the massive stone gate pillars, he turned left on Cypress Road and took off down the hill toward town – never once daring to turn around to check and see if anyone was following him.

Meanwhile, back at the west end of the cemetery, Melvin Curtis was faced with his own issues. He had no clue as to when, or even why, the cemetery had acquired a life-sized statue of Carl Simpson. All he knew was that due to his apparent negligence, he had knocked it over and broke it in half. Along with the dents and scratches he just put in the brand new John Deere riding mower, he knew he probably wasn’t going to be earning any Brownie Points from the cemetery owners over any of this. Looking once again at the John Deere, Melvin figured he could get the mower down to his cottage, pound out the dents and sand the scratches smooth without too much of a problem. A little bit of green touch-up paint and it should be nearly showroom new again. A broken statue on the cemetery lawn would be a completely different story though. He needed to come up with some way to fix or cover this up – and fast.

Melvin walked the short distance over to where James and Albert were just finishing up digging for the next morning’s graveside service. He explained his situation to them with the hopes that maybe they would be able to help him to come up with some sort of a feasible plan. At this point, he was open to any suggestion.

Albert immediately commented, “Hey, didn’t you say that they never found the body that is supposed to be buried here tomorrow?”

“That’s right. Just gonna have a graveside service and bury an empty casket,” replied Melvin. Then, turning his head and pointing toward the chapel with his lips, he said, “Casket’s over there now. Delivered it earlier today.”

Leave it to a couple of odd-ball, grave-digging brothers to help formulate the most bizarre plan imaginable. Without another word spoken and in no time at all, Melvin, James and Albert were carting the broken pieces of the Carl statue over to the chapel where they placed them into the empty casket. Then they locked it - and took the key.

Meanwhile still, over near the back porch of the caretaker’s cottage, the Manticore was digging through the trash cans looking for some food. He had found himself wishing that he hadn’t raised such a fuss earlier in the day about something as silly as spicy brown mustard in lieu of yellow mustard – for now he was hungry. Luckily for him, Melvin had thrown out half a box of uneaten fried chicken from the Chicken Shack earlier in the day. With the crumpled box of chicken in hand, the Manticore walked over to the lawn chair on the back porch, sat down and was just about to take his first bite when suddenly a woman’s voice shouted out to him from across the lawn.

Startled, the Manticore looked up and there stood Medusa – all at once Resthaven Cemetery had another new statue. 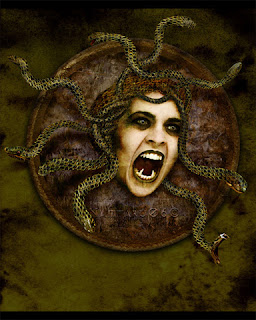 Around on the front side of the cottage, Melvin was riding down the path on the dented John Deere mower. As he drew nearer, Medusa, munching on a fried chicken drumstick, stepped out from behind the juniper bush at the left-hand corner of the cottage. Melvin took one look at her and managed a meager, “What the…“ before he turned to stone and slammed the John Deere into the tree in the middle of the front yard.


Hearing the commotion, Max came running out of the doggy door, barking loudly and headed toward the toppled statue of Melvin next to the crashed riding lawnmower. Sensing an intruder behind him, Max immediately did a one-eighty and started to attack Medusa. He was mid-way into an airborne lunge for Medusa’s throat before he made eye contact with her. Three loud yelps later, Max thudded to the ground as a finely sculpted statue of a charging Cocker Spaniel.

“What was that?” asked Albert as he craned his neck and peered off into the direction of Melvin’s cottage.

“Sounded like Max,” replied James. “Let’s go check it out.”

Five minutes later, Resthaven Cemetery had two additional statues - grave diggers riding bicycles – or more correctly, statues of two grave diggers who appeared to have been involved in some sort of a weird bicycle accident.

Meanwhile yet again, a dark blue Honda Civic pulled in through the entrance gate of Resthaven Cemetery. Agnes Simons, the driver of the Honda, had just gotten off work from her job operating a Subs-R-Us sandwich wagon at the corner of Louetta and Ella. In the passenger seat next to her was her mother, Vera Simons. Vera works the evening shift at the service station in town and, since she doesn’t have a car, Agnes always drives her mom to and from work. Usually there’s barely enough time from when Agnes gets off work to when Vera has to be at work but on this day, Agnes had closed down early because Vera had asked if they could go out to Resthaven Cemetery. Vera wanted to put fresh flowers on the grave of her husband – Agnes’ father. Due to her mother's request, Agnes had tried to call her manager, Carl, a couple of times to see if it would be okay to close an hour earlier than normal. He didn't answer his phone either time. Hoping that she wouldn't get in too much trouble, she decided that she would just take her chances, left him a message, then went ahead and closed early.

As Agnes rounded the pavilion in the center of the cemetery and was about to make the right turn toward her father’s grave-site, Medusa stepped out in front of the car. Both Agnes and Vera screamed as they saw the horrid figure. Agnes made an abrupt turn to the left and rammed the car into the base of the pavilion. Instantly the Honda’s horn commenced a constant, mono-tonal blare as two stone female figures lay slumped across the dashboard.


In town, the Cyclops and his duck were just sitting down at the coffee table in their living room with a couple of beers and a box of fried chicken from the Chicken Shack They were preparing to watch reruns of The Big Bang Theory when suddenly there was a violent knocking on the front door. As Cyclops opened the door, there stood the young man who had given him the can of transmission fluid at the service station a few evenings earlier.

With an alarming urgency, Young John announced, “Cyclops, I really need your help. There’s something horrible going on out at the cemetery!” Then he barged his way in through the front door.

While Cyclops and the duck made quick work of their beer and box of chicken, Young John sat on the edge of the footstool in their living room and, in eerie detail, proceeded to tell the story of Pegasus turning to stone right before his very eyes and assuring them that, beyond a shadow of a doubt in his mind, Medusa was roaming the grounds of the cemetery. No telling who else was in danger.

Within a matter of minutes, Young John Waldenthrottle, Cyclops and the duck, were on their bicycles, riding with a fury out of town and on their way to Resthaven Cemetery.

Posted by Bertha Ashtabula at 7:58 PM
Email ThisBlogThis!Share to TwitterShare to FacebookShare to Pinterest