Young John Waldenthrottle rode his J.C. Higgins ten-speed bicycle with a fury, westward out of town in route to Resthaven Cemetery. He was aerodynamically tucked in the draft behind Cyclops who was hammering down the road on a bright orange, 42-pound, vintage 1972 Schwinn Varsity.  (Never underestimate the strength and speed of a solid steel frame when you have a seven-foot-two, 348 pound giant spinning the pedals!) The duck was securely strapped into the bolt-on child carrier hovering over the rear wheel – feathers flapping in the breeze.

It was a quarter to midnight when the trio started up the last hill before the entrance to the cemetery. Cyclops had a headlight on his handlebars that lit up the entire road in front of them better than most cars. Young John had a cheap little metal bracket on his handlebars that simply held a regular flashlight powered by D-cell batteries – it wasn’t even bright enough for him to avoid running over the squished armadillo that he’d seen earlier in the day. They topped the hill and made the right turn into the drive… Wait – why were the gates still open? Young John was anticipating that they would have to sneak in through the fence about forty feet to the left of the gate. Over there, behind the row of hedges, were a couple of loose vertical bars that could be lifted up enough to allow a person to crawl through between the adjacent bars. It had been that way since Young John was in high school, back when he and his friends would come out here to drink, smoke and tell ghost stories on Friday and Saturday nights. But for some reason, on this night, the gate wasn’t even shut. They rode on through and headed down the central lane – Cyclops still in the lead, lighting the way.

They approached the round-about in the middle of the cemetery and suddenly their headlights reflected off the rear end of a sedan protruding from the flower bed that surrounded the base of the pavilion. They rode up to the car and Cyclops shined his headlight the best he could in through the passenger’s side window. Young John dismounted to take a closer look. Not being able to make out much through the tinted glass, he pushed some of the shrubbery away and opened the driver’s side door - hoping that maybe the interior light would help them to see inside. The door opened about a foot but no light came on. Battery was probably dead. Then Cyclops went around to the driver’s side of the car, shoved his bicycle through the flowers and shrubs right up to the door opening and illuminated the entire front seat area – along with the two stone statues that were slumped forward and up onto the dashboard.

“I knew it! I told you! I told you!” shouted Young John as he leapt back from the car. “That lady there, behind the steering wheel – she’s the lady that works at the sandwich stand. And that other lady – I’ve seen her before too. I think she works at the convenience store or gas station or something. I told you – Medusa was out here and turned Pegasus to stone – now she’s turning living people into stone! This is bad. This is real bad!”

“Calm down John – quiet,” said Cyclops motioning with his hand for Young John to lower his voice. “She may still be out here somewhere.” Then he reached around and pulled his Remington .357 Magnum out of the rear pouch on his bike.

“Okay. I’m feeling a little better now that I see you brought that along with you,” said Young John. “I mean, all I got in the bag on the back of my bike is office supplies.”

“I think so,” replied Young John.

“Let’s park our bikes here, walk around and check things out. I can take the headlight off my bike – use it like a flashlight so we can see where we’re going.” 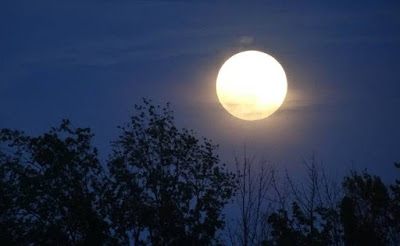 Young John and Cyclops leaned their bikes up against the side of the Honda Civic. Cyclops unbuckled the duck from the child-carrier and set him up on his shoulder. He loosened the bracket on his handlebar and removed the headlight. Next, he undid the Velcro straps that held the battery to the top tub of his bike frame. Using the Velcro strap to attach the headlight to the battery pack, Cyclops had a perfect 3500-lumen, high-powered flashlight. With that in his left hand and his .357 in his right, he was ready to get this cemetery patrol started. Young John Waldenthrottle had a staple gun. He was also going to carry his flashlight but as soon as he snapped it out of the metal bracket, the light bulb flickered off and on a couple of times then the batteries completely died. Good thing there was a full moon out.

Posted by Bertha Ashtabula at 6:50 PM
Email ThisBlogThis!Share to TwitterShare to FacebookShare to Pinterest