Riding with – Uh, Nobody is Riding at All!

Cyclops and Young John worked their way along the western path from the pavilion and down the hill toward the caretaker cottage. As they walked, Cyclops moved his light left and right and from tree to tree, causing the shadows to constantly dance around them. In turn, Young John nervously jumped in perfect timing with each shadow movement, certain that each consecutive one was Medusa coming after them.

“Oh my God, what happened here?” questioned Cyclops as they wandered into the front yard of the cottage which was completely littered with stone statues. He shined his light on the John Deere lawnmower – wrapped around a tree with the statue of the driver spilled out on the ground next to it – feet still up inside the mower.

“That’s Melvin, the caretaker. I met him this afternoon,” said Young John. “That’s my pen in his shirt pocket.”

Moving his flashlight to the left, Cyclops illuminated the scene of two bicycles mangled together with a stone cyclist twisted into the framework of both bikes. The other cyclist was belly down, draped across the birdbath.

“Albert and James – gravediggers,” noted Young John out loud as if taking roll call. “I met them a little bit earlier this afternoon.”

“Seems like quite a few people that you met today had a somewhat shortened lifespan,” commented Cyclops.

“Whatever,” said Young John with a look of mock-disgust on his face. “Move your light a little further to the left. There – that’s Melvin’s dog – Max the Cocker Spaniel. My gosh! He doesn’t look like he’s very comfortable at all – what a horrible pose to be stuck in for all eternity.”

“Met him also a little earlier this afternoon, did ya?” queried Cyclops.

Suddenly, there was a thud on the ground near their feet. They both jumped as Cyclops swung the light around and shined it down on the ground. Then, at about the same moment he realized that he didn’t feel the weight of his duck on his shoulder any more, he cast his light on the little stone statue lying a few feet away in the grass. A split-second later, a brain-piercing shriek coming from the other side of the John Deere mower shattered the stillness of the night and sent chills straight up Young John’s spine, instantly paralyzing him in his tracks. Cyclops just stood there, looking down at his petrified duck. One by one, every muscle in his body tightened. The veins on his forehead started to bulge. His eye, narrowed with the growing urge to kill. The plastic housing of the converted handlebar headlight was on the verge of crumpling like paper in the death-grip of his clinched fist. The anger and tension was building up like the force inside a volcano about to erupt until…

Cyclops let out a roaring scream as he charged in the direction of Medusa.

Young John Waldenthrottle dropped his staple gun to the ground, turned and charged for cover around the back side of the cottage. 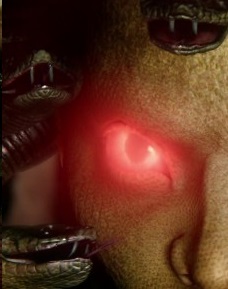 Medusa stepped out from behind the tree near the mangled John Deere and moved directly into the Cyclops’ path. She stood there, her arms slowly rising upward from her sides as if she was summoning reinforcements of evilness from the furthest depths of the planet. She focused her deadly gaze in his direction as he continued to run toward her. Cyclops, wailing like an anguished madman and forsaking all care, tossed the flashlight and then the gun to the ground. Then, defying the very curse that he knew would immediately turn him to stone; he raised his head to stare directly into the eyes of pure evil - and then he ran even faster toward Medusa.