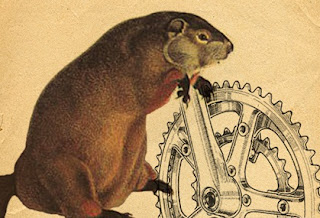 Phil called me on the phone the other day and asked if I wanted to go bike riding with him. I told him that it sounded like a good idea and to come on over. Then he asked me what I thought about taking out my tandem. Now – Phil does have his own bike but it is rather small with tiny wheels, somewhere around six inches in diameter or something. He has to pedal like crazy and he still can only manage to do four, maybe five miles per hour. All this is mainly on account of Phil having really short legs. Phil has really short legs mainly on account of him being a groundhog. Phil is THE Phil of Punxsutawney Phil fame, a job he has held since 1998. He actually lives in Houston but travels to Pennsylvania in late January for the Groundhog Day festivities.

So anyway, when Phil asks me what I think about taking out the tandem, I am almost always in agreement. Correction – I am always in agreement. There were a couple of times – right after Phil got his bike – when he insisted that we each ride our own bikes. Well, you do the math:  forty mile bike ride; four miles per hour – tops; trying not to hit a 15-pound fur ball spinning like crazy on a bicycle with six inch diameter wheels. “Sure Phil, let’s take the tandem!”

As Phil was heading over to my house, I rigged up the “groundhog stoker kit” to the back seat area of the bike. This apparatus is simply a clamp-on chainring and set of pedals mounted above the normal stoker chainring and connected via an additional chain running vertically. They’ve been around for years for parents who want to take their smaller children riding on the back of the tandem but whose legs are not long enough yet to reach the normal stoker pedals. I discovered that it just takes a slight bit of additional modification to get those stoker kits to accommodate the extra short legs and ridiculously weird feet of a groundhog – along with a couple of extensions for the pedals which help to keep the chainring from completely “sawing” the groundhog in half right down the middle. But let’s not get into the technical stuff here in this article.

In short order, there we were, Phil and I riding the tandem down the road on an absolutely beautiful day. In almost no time, we were out of the city traffic and cruising down one of our favorite, tree-line rural roads – enjoying the ride and each other’s company. Up to that point, our conversation had primarily consisted of catching up on the latest tedious goings-on since we’d last seen each other. Once that was out of the way, we were free to dive headfirst into one of our more meaningful, thought-provoking, and deepest of deep confabulations. In due course, the confabulation steered itself to Phil’s job – Groundhog Day weather prediction.

“You do know,” he started, “it hasn’t always been a groundhog that was employed to foresee the mid-winter forecast.”

“It's true, back in the very beginning, 70 million years or so ago, a velociraptor was used.”

I commented, “Based on what I know about velociraptors, that sounds a tad dangerous if you ask me.”

“Oh, indeed it was,” confirmed Phil. “On that very first February 2nd Velociraptor Day, the townspeople all gathered around as the mayor opened the cage door to let the velociraptor out to check for its shadow… well, it was total devastation. Somewhere around eighty percent of the townsfolk were slaughtered right there on the town square. It was a bloody mess. It took the local National Guard the better part of the rest of the day to get the velociraptor back into its cage and a week to clean up the carnage.”

“It does sound like quite a disaster.” We stopped for a moment at a flashing red light, waited for oncoming traffic to pass, then rode on across the intersection. Phil continued with his story.

“Anyway, that went on for about 2000 more years before they finally gave up on using the velociraptor. In fact, the ritual celebration just basically died out until around the mid-1300’s. At that time they decided to call February 2nd Alligator Day. Unfortunately, the last Alligator Day was held in February of 1391 when it was observed that at least ninety percent of the human population was missing a leg or an arm or two. Once again the ritual came to a halt.

“About 40 years later, someone came up with the bright idea to quit using flesh-eating creatures to look for their shadow on February 2nd in an attempt to predict exactly how much winter would be left to endure. So the decision was made to use a human being and thus stop all of the February 2nd bloodshed. The mayor assigned a team to find an infant in time for the first Person Day to be held on the 1432 February 2nd. Lo and behold, they stumbled across royalty in a neighboring land who were willing to give up their son for the newly assigned task – their son, the Prince of Wallachia, Vlad III.  Unfortunately, after a few years, that also turned sour as February 2nd became known as Vlad the Impaler Day.

“This whole let’s-try-to-predict-how-much-winter-is-left-this-year plan really took its toll on generation after generation for way longer than it should have. Once, somewhere in the late 1600’s, the mayor at the time, in an effort to once again revive the festivities – but at the same time wanting to steer clear of any further bloodshed – declared February 2nd as Sponge Day. I think it was actually 1666 – the only day that Sponge Day ever existed – and the last year for that mayor to hold office. To this day, the sponge has never once even poked its head out the door to check for its shadow.

“In the 1700’s, the Germans decided to use candles – which for some reason someone thought would work better than a sponge! They called it Candlemas Day.

“Apparently that made perfect sense – basically because no one died – so Candlemas Day stuck around until 1886 – the year of the Great Candle Epidemic. With candles in short supply, the decision was made to start using groundhogs – an obvious replacement! And so, on February 2nd in 1887, the first pilgrimage to Pennsylvania was made to see the first Punxsutawney Phil make his appearance to predict the end of winter. And on that day, he saw his shadow – predicting six more weeks of winter. And Punxsutawney Phils have been doing it ever since – with an amazing accuracy of thirty nine percent."

I replied, “Thirty-nine percent, heh? I think that’s better than our local meteorologists.”

We slowed the tandem to a stop at another intersection. We both took a moment to get a drink of water and munch on the PB&J’s that I had prepared for our ride. We did a quick leg-stretch then pedaled on across the intersection and down the road. It’s always amazing what you can learn on a bike ride with a friend.


Be sure to read ALL of
The Groundhog Pentalogy:

Posted by Freewheelin' Dave at 9:45 PM
Email ThisBlogThis!Share to TwitterShare to FacebookShare to Pinterest