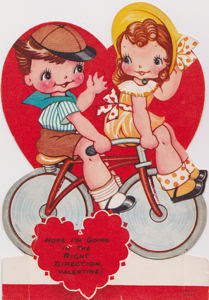 Franklin had worked through lunch and then left his office three hours early on February 14th – right at two o’clock. It was a beautiful day for mid-February. The skies were clear and the sun had warmed the temperatures to a fabulous 78 degrees by noontime. What cyclist could pass up an opportunity for a bike ride on a day like this?

After pulling into his driveway, Franklin was a blur as he rushed through the house and into his bedroom where in a matter of seconds his work clothes had been replaced by his cycling clothes. In a non-stop motion, he cruised through his kitchen to fill his water bottles, grabbed his cycling shoes and helmet off the shelf in his laundry room, took his bike off the rack and aired up the tires then punched the code on the garage door keypad and zipped down the driveway and out of his subdivision. Destination: some point about fifteen miles away.

While Franklin was riding up the main boulevard that leads from his subdivision to the Farm to Market road that will take him to the rural countryside, he came up behind a couple, a man and woman, who were also out riding their bicycles. He slowed a bit to say hi as he passed and then he recognized the woman as one of the workers at the Subway sandwich shop near his office.

“Hey! Do you live around here?” he asked, slowing a little more to ride at their pace. “My name is Franklin. I come into your Subway once or twice a week.”

“Oh hi!” she replied. “Yes, I recognize you. I’m Maria and this is my husband Hector.” Then as she points to the right turn a few hundred yards ahead, “We live just a couple of blocks down that road. We’re just finishing up a little ride and then Hector has to get ready for work. He works the night shift at the steel plant over by the airport.  We try to ride at least three days a week before he goes to work. We usually ride about ten miles – today we did twelve. We’re not real fast. Probably not as fast as you but we’re getting better.”

As they approached their turn she paused long enough for Franklin to be able to say, “Well, nice to run into you. Maybe we can ride together some time since we live so close to each other.”

As they made their right turn, Maria shouted, “Yeah that would be fun. We can talk about it next time you’re in the shop.” They waved over their shoulders as Franklin continued straight.

“Hmmm,” he thought to himself. “I wonder if Hector ever gets a chance to speak.”

About five miles further, Franklin  came to FM-2920, where he makes his usual left turn. There’s a traffic light at the intersection. It was red. Franklin pulled into the left turn lane, came to a stop and waited for the light to turn green.

As he was waiting he heard the sounds of drums coming from somewhere off to his left. He turned to look. With squinted eyes, he focused on the distant sight of someone sitting on the side of the road playing a set of drums. Inside his brain, the thought, “Well that’s not something you see every day.”

The light turned green and Franklin  headed to the far side of the intersection and settled into the westbound shoulder. He maintained a slower than usual pace as he neared the young man playing the drums. It was a full set of drums – cymbals and everything. Franklin came to a stop about ten feet away from him and watched and listened for a while.  The guy was good. No idea why he was there though – on the shoulder of this fairly busy four lane road with basically no foot traffic at all. He thought maybe he should offer a tip but he only had a debit card and a twenty dollar bill. The kid was good, but not that good! Franklin clipped into his pedals and headed on down the road – the sounds of the drums ultimately fading into the distance behind him.

Within about six more miles, Franklin  was approaching the turnoff to one of his favorite, local stretches of road. It was the kind of road where the trees on each side grew up and over, forming a series of tunnels. There were no shoulders and the road had deep ditches on each side – usually at least partially full of water. For some reason Franklin had always envisioned alligators inhabiting the drainage ditches – even though he never saw one to give him any reason to think that they were actually there. But, he just figured if you had to have a thought in your head about the drainage ditches on each side of one of your favorite roads, it might as well include something to do with alligators living there too. At the end of the tunnel section, Franklin crossed the railroad tracks and navigated the S-turns past the acreages where the horses seem to always line up at the white board fences to watch him ride by.

From there, it was a series of two-lane roads meandering through rural countryside – past acreages with dwellings ranging from mobile homes to luxurious two and three story mansions. Mom and Pop businesses ranging from grocery stores, to welding shops – from furniture restoration shops to trailer sales and all the way to establishments resembling permanent garage sales. Zoning ordinance freedom at its finest! And, except for the occasional diesel burning dually driver deciding to gun it just as he passes, sending out a cyclist-engulfing cloud of black, it was another one of those stretches of road that Franklin had classified as “favorite.”

As he reached his turn-around point, fifteen miles from home, someone had placed an old, well-worn couch out on the roadside. A hand painted sign was propped up against it advertising that the couch was FREE! Franklin slowed to make the u-turn and head back home. He glanced back over at the couch as he turned and there, tucked into the corner near the left arm and back cushion, was a groundhog - asleep. A thought-replay came on inside Franklin’s brain, “Well that’s not something you see every day.”

For the most part of the return trip, Franklin had a favorable wind which helped it to be a quicker journey than the outbound one. There were no alligators – as usual. There was no Maria, no Hector. The guy playing the drums was gone. Even most of the horses had left their stations along the expanse of white board fence.

Arriving back at his house, Franklin put his bike on its rack and returned his helmet and shoes to their shelf in the laundry room. He took the water bottles to the kitchen sink, rinsed  them out and wiped the road grit off with the sponge. He then went to take a shower and change into some clean clothes. About thirty minutes later, he glanced at the clock and figured that his girlfriend would probably be getting home from work. While looking at the bouquet of flowers that he had bought for her, he picked up his phone and pressed her speed dial number.


“Hey Sugar, Happy Valentine’s Day! I made the reservation for seven thirty at our favorite Italian restaurant...”


Enjoyed the Ride - Enjoy the Evening!


You know, there are four other parts to
The Groundhog Pentalogy:

Posted by Freewheelin' Dave at 12:15 AM
Email ThisBlogThis!Share to TwitterShare to FacebookShare to Pinterest