Cycling with Hector and Maria

Enjoy a quick flashback to February 14th and you’ll remember that Franklin had set out from his house that day to get in a little afternoon bike ride before having Valentine’s Day dinner with his girlfriend. Within a couple of miles after starting, he came across Maria and Hector as they were just finishing their 12-mile ride for the day. Before parting, Franklin had suggested that, since they lived near each other and all three of them enjoyed cycling, they should get together someday and go riding. Well, wouldn’t you know it, they did.

Let’s join them at about the half-way point of their ride. At the moment, Maria is in the middle of saying:

“Do you see that house over there? The one with the pink flamingo in the flower bed to the left of the front porch? That’s where my good friend Karen used to live back when we were in high school. She worked at the Dairy Queen after school and on weekends and we used to hang out there and she would sneak us a free ice cream cone now and again. Well, I actually didn’t hang out there very long after I got my own job working at the grocery store. That kept me pretty busy what with school and homework and, you know, I did most of the laundry around my house. That wasn’t really one of my mother’s favorite things to do. I really don’t remember what any of her favorite things to do were - well, she liked to watch soap operas on TV – she was good at that. She had a friend who liked to run – back before running was popular. I tried running once. I wasn’t really crazy about it. I only did it because Hector thought he’d like it – which I guess he did. He did it a lot more than I did. He ran a couple of 10K’s – was gonna train for a half-marathon but then that’s when he started having all the problems with his knees and that was that – end of running. Didn’t hurt my feelings none I tell you that right now. No sir, not one little bit. Running gave me weird food cravings. Once when I was running, it was just a practice run around my neighborhood, like about three miles tops, all I could envision the entire time was a big ol’ block of cheddar cheese. Strangest thing for sure, I’ll tell you that right now. But after Hector got the knee surgery we got these bicycles. That was about three years ago. Isn’t that right, Hector? About three years ago we got these bikes. Oh, I’m sure he wouldn’t remember anyway. Maybe it was a little bit more than three. We thought about taking up tennis. There are a couple of tennis courts at our subdivision club house. Do you have tennis courts in your subdivision? What am I saying? Of course you have tennis courts there. I forgot I went to a Labor Day picnic in your subdivision a couple of years ago – Hector and I rode our bikes over there actually – and I remember they had all the tables set up just right outside the fence to the tennis courts. Anyway, we tried it a time or two and Hector started complaining that it was bothering his knee – it coulda been too soon after his surgery, I don’t know. It was just a little too fast for me. I just couldn’t seem to keep my eye on the ball and it came at me so quickly and most times I couldn’t even get my racket turned the – that’s what you call it, right? Racket? Or is it paddle? No – that sounds silly. That’s ping pong, isn’t it – or does everyone call it table tennis now? When I was growing up, I don’t even remember EVER hearing the words “table tennis” – it was always just ping pong. Funny how things change over the years, isn’t it. Like, remember when people used to say “radar range” when the microwave ovens first started getting popular? And now it’s refrigerator instead of ice box. And diapers – remember when diapers were only made out of cloth? Now we have to call them cloth diapers so people will know that we’re talking about the ancient kind of diaper! And we have to call the old-style phones that we have in our houses “land lines” since almost everyone now has cell phones. I got my first cell phone in 1998 – I still have the same number. I was probably behind the times because I never had one of the big huge mobile phones – what did they call those? Bricks? Yeah, that’s what they were called – bricks. I had a little flip phone. It’s probably in the bottom drawer of my nightstand – with a dozen other cell phones I’ve had since then. Is it okay to call them cell phones still? Or has that changed? I tell you, I can’t keep up with all of this stuff. See this computer I have on my bike. It’s a simple little thing – tells me how fast I’m going and how far I’ve gone and how long I’ve been riding. I think it tells me the time too but I can never figure out to set that correctly so I just look at my watch. But now Hector wants to get one of those fancy GPS thingies that show him the route and where he is and when he gets home he can hook it to the computer and find out all kinds of information about the whole dang ride. Sometimes I just don’t know what’s gonna be next. And have you seen the instruction manuals for these things? My goodness – they’re all like a sixty page booklet or something – and they’re tiny as all get out and you have to use a magnifying glass to read them and only about the first five or six pages are in English anyway and then you’ve got eleven or twelve other languages to deal with. I mean – this is America, right? All we need is English and Spanish right? Of course I’m right. If you ask me, I think it’s a big waste of paper to print all of those other languages in the instruction book. No, but I really used to love to play ping pong – me and my brothers – we were pretty good. My first year of high school I was on the ping pong team – we went all the way to nationals…”

And this was pretty much how the entire bike ride had gone – Franklin riding next to Maria, with her endless conversation, and Hector following a couple of bike-lengths behind. Franklin nor Hector being able to squeeze a word in edgewise, sideways, frontways, backways or whatever.  But, unbeknownst to Maria, Franklin had managed to route their course to a section of countryside near the local wild life game preserve. As they topped the hill, the next section of road was a steep, fast paced, two-mile downhill with an abrupt 90 degree right turn along the cliff-side road that overlooked the preserve.

Yes Dear Reader, I sense that you are already seeing the direction that this little tale is headed.

As our trio of riders shifted into their highest gears, the scenery zipped by on either side with increasing speed. Maria continued to ramble. Franklin looked down at his computer – 28, 29, 30 miles per hour. Maria never missed a beat in her chatter. Hector remained tucked into the draft a few feet behind Franklin’s wheel – 39, 40, 41, 42 miles per hour. Maria’s blather droned on and on and on. As Franklin’s computer showed that they had reached 50 miles per hour, they were within 200 feet of the right turn – 230 feet from the edge of the cliff.

Franklin screamed, “STOP!” and he and Hector slammed on their brakes.

It was obvious that Maria was too busy listening to the sound of her own voice to hear anything that anyone else had to say. Within about 75 feet of the turn, smoke was streaming from the brake pads on Franklin’s and Hector’s bikes. Franklin was expecting the tubes to burst at any second from the heat building up on the rims. And while he was thinking that thought – Maria and her bike disappeared over the edge of the cliff.

As Franklin and Hector approached the turn at a manageable speed, they stopped, walked over to the edge of the cliff and peered down. No sign of Maria. Approximately 150 feet down and about 60 or 70 feet out from the base of the cliff, they could see her bike, laying all bent up on the rocky banks of a lagoon. In the murky waters of the lagoon, four or five alligators were thrashing around – obviously fighting over something. Hector looked at Franklin. Franklin looked at Hector.

Hector said, “I don’t guess there’s too much we can do about that, huh?”

“Nope,” said Franklin, “I think that bike is just way too messed up to even try to repair.”

They walked their bikes back over to the road and then began the trip back home. 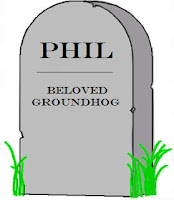 As Franklin and Hector approached the outskirts of town, they took a left turn into the Resthaven Cemetery. They followed the tree lined road through the old section of the cemetery until they got to a more open area where the newer graves were located. They coasted to a stop near a fresh grave-site right next to the roadside. The newly placed headstone bore the inscription: PHIL – Beloved Groundhog. Franklin and Hector paid their respects and then they turned and rode back towards the gate.

As they approached the gate, they noticed a tree stump that they hadn’t seen on the way in. A tree stump that was a good three feet in diameter and cut at about two-and-a-half feet above the ground. It had a tiny, little door on the side of it that opened just as they were nearing. Through the opened door appeared a sponge that looked like it had just woken up from a deep, deep sleep. As the sponge staggered a couple of feet from the tree stump, it looked down and immediately saw its shadow.

And this about wraps it up for
The Groundhog Pentalogy

...or does it?
Epilogue
Or Maybe the Epilogue Went Like This...
The REAL Epilogue

Posted by Freewheelin' Dave at 9:03 PM
Email ThisBlogThis!Share to TwitterShare to FacebookShare to Pinterest