The Groundhog Pentalogy - The REAL Epilogue

“SON OF A GUN my whole body aches!” Maria blurted out loudly as she finally regained consciousness. She rapidly batted her eyelids but she could not see a thing. Wherever she was, it was pitch black.

Then a muted voice, as if from a substantial distance away said, “Hello? Is someone there?”

Maria, still rubbing her eyes in an attempt to adjust her vision responded, “Who’s there? Where are we?”

“My name is Phil,” replied the voice.

“So where are you Phil? Where are we?”

“I’ve been here for several days I think – maybe weeks. I’m not really sure where we are. I haven’t been able to see a darn thing the entire time.”

“Well wherever we are, it sure as heck stinks! So where are you?”

“I’m working my way towards the sound of your voice. Keep talking. Hold out your hand.”

As Maria reached out her arm, she couldn’t help but to comment, “You know, I think that’s the first time in my life that anyone ever told me to keep talking- OH MY GOD! WHAT WAS THAT?”

Maria abruptly recoiled and pulled her arm back tightly against her body. “What the heck was that? What just touched my hand?”

“That was my hand,” replied Phil. “I’m a groundhog. I have tiny little weird hands.”

“Well, it certainly scared me to death,” replied Maria. “Wait a minute – you said your name is Phil?”

“And you’re a groundhog?”

By this time, Phil had managed to crawl up beside Maria as she sat in the darkness of their unidentifiable confinement. Maria felt Phil brush up against the side of her outstretched leg and she reached over with her hand and felt the furriness of the back of his head. She continued, “You know, last week I read about a funeral in the newspaper. It was a funeral for a groundhog – a groundhog named Phil. A friend or acquaintance of yours perhaps?”

“No. That’s kind of hard to believe. I’m the only groundhog named Phil that’s even around right now.”

“Well all I know is, they definitely had a funeral out at the Resthaven cemetery a week or so ago and buried what they said was a groundhog by the name of Phil.”

“Bummer – I guess they all think I’m dead!” moaned Phil.

The receptionist pushed the button to answer the incoming call and then spoke into the headset, “State of Texas National Guard. How may I direct your call?”

Half out of breath and with a hurried importance, the voice on the other end of the line announced, “This is Dan Wagner, Chief Director at the Sam Houston Wild Life Preserve Laboratory. Connect me with whoever is in charge there. And hurry!” 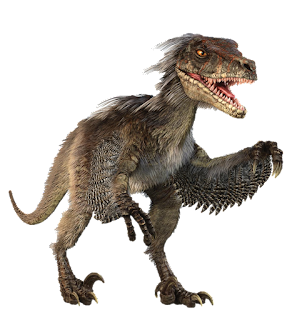 “Commander,” Dan interrupted, “this is Dan Wagner out at the wildlife preserve. We’ve got an emergency situation that needs immediate attention.”

“What kind of a situation are we talking about here?” queried the commander.

“Two of our adult velociraptors have escaped from their cages in the lab and are now running loose in the preserve.”

It was a sunny afternoon out at the lagoon in the Sam Houston Wild Life Preserve. The five resident alligators were stretched out comfortably on the cool, muddy banks of the lagoon under the shade of an umbrella of oak trees that lined the dirt road just to the south. With half-opened eyes, four of the alligators gazed across the lagoon to the rocky banks near the base of the cliff hoping to beat the big alligator to the jump in case food flew over the edge of the cliff like it did the day before. The big alligator, Ernest, as dubbed by the Preserve Rangers, was almost always the first to get any food – often swallowing it whole before the others even got a chance at it. But at the moment, Ernest was sound asleep in the mud. The other four, although fighting the urge to go to sleep themselves, were not about to let Ernest get the better of them should some food happen to wander by or even once again fall right out of the sky.

The five of alligators all slept soundly for a good two hours – until about the time that the snapping sound of a fallen tree branch caused Ernest to open one eye and focus in the general direction most likely to have generated the sleep-interrupting  noise. Slowly he opened the other eye and watched for movement in the brush beyond the lagoon. The other four alligators, completely oblivious to any possible danger, continued with their peaceful state of unconsciousness.

Ernest began to slowly make a visual search of the undergrowth from his position across the lagoon, moving only his eyes so as not to alert any possible predators that he was wise to their approach. Then suddenly – another snapping twig; a shadow along the side of a tree trunk; leaves rustling near the ground. Ernest opened both eyes wide and raised up on all fours, ready to make a fierce dash into battle should the enemy present itself. Then, just as Ernest saw the head of a velociraptor appear from the dense brush and as he push off with his legs to dive into the water and cross the lagoon for the confrontation, he felt the crushing blow to his tail that stopped him dead in his tracks. He spontaneously flipped his body to see that another velociraptor had jumped onto his tail and had it pinned to the ground. Ernest lashed out with his front claws and his jaws but before he could muster much of a defense, the first velociraptor had dashed across the lagoon and joined in on a two-against-one fight. The velociraptors began ripping Ernest to shreds. In all of the commotion, the other four alligators woke up and attempted to enter the battle. The one velociraptor loosened its grip on Ernest’s tail long enough to let out a deafening shriek and lunge at the other alligators who immediately gave up the notion of attack and went scurrying off into the woods. It then returned to its task of turning alligator tail into a shredded, reptile sushi mess.

Ernest feverishly swung his claws – often into blank air but occasionally into the hide of one or the other of the velociraptors. But even as big as Ernest was, he was fighting a losing battle against the two feisty velociraptors. He held his own for quite a while and managed to do some serious damage to both of them – if it just hadn’t have happened that one of the velociraptors decided to grab Ernest’s head, twist it around, and then rip it completely off of his body.

Holding the alligator head in its hands, the velociraptor raised it above its own head and began jumping around in some sort of primitive victory dance. Both velociraptors, egotistically proud of their tactical skills, started prancing around the banks of the lagoon seemingly to lay claim to their newly conquered territory. They carried on like that for several minutes – right up until the time that an Air Force F-16 Fighting Falcon jet fired four direct-hit missiles that blew both velociraptors to smithereens and their souls, if they had possessed any, straight back to the prehistoric ages.

As the evening skies started to dim, the Sam Houston Wild Life Preserve was crawling with National Guard troops, official Preserve vehicles and personnel, local and national governmental agencies, and of course, an army of reporters and photographers. The lagoon and the entire surrounding area had been roped off as crews of scientists investigated the scattered remains of the “up-until-then-considered-extinct” velociraptors. Four Preserve Rangers parked their van on the dirt road and headed over to pick up the remains of Ernest’s body. Then, just as they were about to reach down to pick up the huge alligator torso, it suddenly made a spastic twitch to the side. All four rangers jumped back about three feet then stopped. Ernest’s body jumped again – and again. His back started to bulge up and down. The rangers had never seen anything like that at all. The reporters and photographers rushed over to see what was happening. Everyone stood around in awe and gasped as Ernest’s headless, near-tailless body thrashed around on the muddy banks of the lagoon.

After a minute or two of this, the body once again stopped moving. Then, as everyone’s eyes were fixed upon the lifeless alligator's body, a human hand appeared from the opening left by Ernest’s severed head – and then, a second hand. The hands grabbed hold of each side of the opening and pulled and pushed until…  Maria popped her head out of the alligator’s neck opening and eventually worked herself free. Immediately afterwards, Phil the groundhog appeared and also exited the dead alligator’s carcass. For a few seconds, there was utter silence – until all at once, the reporters and photographers charged then surrounded Maria and Phil and started bombarding them with questions.

“How long have you been in there?” – “How did you get inside the alligator?” – “How could you two survive in there?” – “Was there enough air in there for you to breathe?” – “Is there anyone else inside?” – “Did either of you find a sponge in there?”

And Maria and Phil lived happily ever after -
The Groundhog Pentalogy

(But who's that buried out at Resthaven Cemetery?)

Posted by Freewheelin' Dave at 12:00 AM
Email ThisBlogThis!Share to TwitterShare to FacebookShare to Pinterest