Franklin, George and Lawrence Go for a Ride

Franklin said, “Look, George.
Look down the street.
That is my friend Lawrence.
Do you see Lawrence riding his bicycle?”

George said, “Yes Franklin.
I see your friend Lawrence. He is riding this way.
Let’s ask him if we can ride our bicycles with him.”

“I will wave to him and tell him to stop,” said Franklin.
“Hey Lawrence! Hey Lawrence!
Come over here and stop.
Stop. Stop. Stop.”

Lawrence stopped and said, “Hello Franklin.
I am riding my bicycle to the lake.
It is a nice day to ride.”

Franklin said, “Hi Lawrence.
This is my other friend.
His name is George. 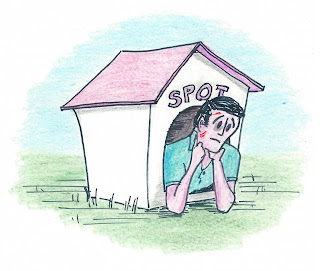 George lives in a tiny house in the backyard with his dog, Spot, because his wife kicked him out of his big house on account of he forgot to get her anything for Valentine’s Day.”
Lawrence said, “Hello George.
HOLY CRAP! Your face looks bad.
Did you get mugged?
Did someone hit you in the face with a bat?”

George said, “Hello Lawrence.
We can change the subject starting right about now,
if you don't mind.”

“Okay,” said Lawrence. “Would you like to go
bicycle riding to the lake with me?”

Franklin said, “That would be a lot of fun. Let’s go.”

Lawrence said, “Hey Franklin,
what is that inside the bag on your bike?
It is moving.” 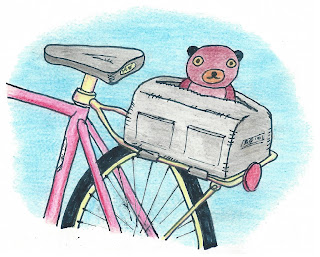 “Franklin said, “Oh,
that is my groundhog.
His name is Phil.
Phil will ride in the bag.”

George said, “Yes,
Phil will ride in the bag.
His legs are tiny and it will take us all day to get to the lake if he rides his own bike.”

Riding Bicycles to the Lake

Franklin said, “Look George.
Look Lawrence.
I am riding my bicycle
without holding on to the handlebars.”

George said, “Look Franklin.
Look Lawrence.
I am also riding my bicycle
without holding on to the handlebars.” 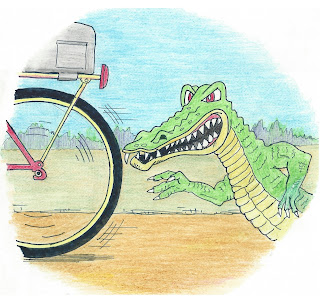 George said, “I think I want to go home now.”

“I want to go home too,” said Franklin.

Lawrence said, “Well go ahead and go home.
You can both go home.
Boo hoo hoo you big-ass babies.
Go home and cry.
I am riding my bicycle to the lake.”

Franklin said, “This is a sad ride.
That was my favorite bicycle bag.”
George said, “I have one like it that you—
Look out Franklin! What are you doing?
You are heading straight for me.”

“Lookout Franklin,” said George.
“You are going to hit that tree.
Down, down, down you go.
What a goober you are.”

“Don’t call me a goober,” said Franklin.
“At least I remembered Valentine’s Day.
Now help me pick up my bicycle.
Help me see what is wrong.” 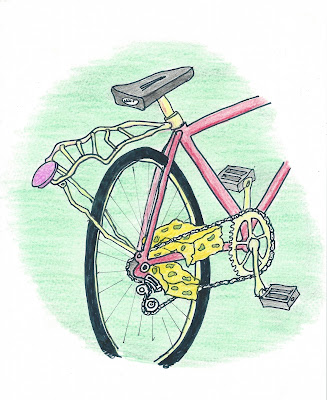 George said, “Oh look.
Look Franklin.
You have a big fat sponge stuck in your spokes.
This is why you wrecked.
This is why you fell down.
I will take the sponge out
and you can ride again.”
Franklin said, “Thank you George.
Thank you for fixing my bicycle.
We can finish riding home now.
We can ride our bicycles home.
It is a good day for a ride.
I miss Phil.
I can’t believe you called me a goober.”

Keep Trying to...
Enjoy the ride!

You have now finished Part Four of
The Groundhog Pentalogy

Posted by Freewheelin' Dave at 9:02 PM
Email ThisBlogThis!Share to TwitterShare to FacebookShare to Pinterest