“SON OF A GUN my whole body aches!” Maria blurted out loudly as she was starting to regain consciousness. She rapidly batted her eyelids but she could not see a thing. Wherever she was, it was pitch black.

Then a muted voice, as if from a substantial distance away said, “Hello? Is someone there?”

Maria, still rubbing her eyes in an attempt to adjust her vision responded, “Who’s there? Where are we?”

“My name is Phil,” replied the voice.

“My name is Maria, Phil. Do you have any idea where we are?”

“Not one clue whatsoever. I’ve been here for several days I think – maybe weeks. I’m not really sure where we are. I haven’t been able to see a darn thing the entire time.”

“Well wherever we are, it sure as heck stinks! So where are you?”

“I’m working my way towards the sound of your voice. Keep talking. Hold out your hand.”

As Maria reached out her arm, she couldn’t help but to comment, “You know, I think that’s the first time in my life that anyone ever told me to keep talking. Usually I kinda get the impression that most people think I talk too much. I mean, they don’t always come right out and tell me I talk too much but you can tell if you watch their face - OH MY GOD! WHAT WAS THAT?”

Maria abruptly recoiled and pulled her arm back tightly against her body. “What the heck was that? What in the world just touched my hand?”

“That was my hand,” replied Phil. “I’m a groundhog. I have tiny little weird hands.”

“Well, it certainly scared me to death I’ll tell you that right now. I can’t see a danged thing in here, wherever we are, and I’m expecting to reach out and touch a human hand and then all of the sudden here’s this little freaky… Wait a minute – you said your name is Phil?”

“And you say you’re a groundhog?”

By this time, Phil had managed to crawl up beside Maria as she sat in the darkness of their unidentifiable confinement. Maria felt Phil brush up against the side of her outstretched leg and she reached over with her hand and felt the furriness of the back of his head. She continued, “You know, they just buried a groundhog out at the cemetery last week – a groundhog named Phil. Was he a friend or acquaintance of yours perhaps?”

“No. That’s kind of hard to believe. I’m the only groundhog named Phil that’s even around right now.”

“Well I don’t know about that but what I do know is, they definitely had a funeral out at the Resthaven cemetery a week ago and they buried what they said was a groundhog by the name of Phil. In fact, I got this friend who was telling me the story about how he was out bike riding and he had the groundhog on that back of his bicycle and a big ol’ alligator came running up and snatched it right off of his bike – the bag he was riding in and everything – nearly tore the rack off the bike too. I got chased by some dogs one time – vicious little creatures. There were about five of them – whaddya call ‘em – bull dogs. No – not bull dogs – uh – the other kinda bull dogs – I mean not bull dogs but bull something else – or something bull – don’t tell me.  Fox! Fox bull – no that doesn’t sound right either. Let’s see… bull terrier, bull… bull… bull dane. Dane bull… doberbull… dogbull…  Hang on – it’ll come to me – just give me a bit. Bit – that’s it. Bit. No, not bit – pit. Pit! It’s pit – pit bull. They were pit bulls. That’s what I do a lot of times when I can’t think of a word – I just start trying to sound out different things until it comes to me. I’ve always been real good at that. I may not think of a word right off the bat but if I just keep talking and say the words out loud as soon as they pop into my head, I can usually figure out what the right word is. My mom used to tell me I had a knack – that’s what she called it – a knack. She would say, “Maria, you just have a knack for conversation.” Although when she said that to me, it was usually in Spanish instead of English. We mostly spoke Spanish around my house when we were growing up but in school and everywhere else I would go, I would always try to speak English. Most people now can’t even tell that I have any kind of accent when I speak English. Maybe my Spanish has gotten a bit rusty over the last few years but I don’t really have too much problem trying to get my point across when I’m speaking Spanish. I guess I just have that knack.” It was a sunny afternoon out at the lagoon in the Sam Houston Wild Life Preserve. The five resident alligators were stretched out comfortably on the cool, muddy banks of the lagoon under the shade of an umbrella of oak trees that lined the dirt road just to the south. Four of the alligators were sound asleep – enjoying their afternoon nap like all of them usually do in the early afternoon. But on this particular day, the biggest of the alligators, Ernest (as named by the Preserve Rangers), was having trouble getting any kind of rest at all. While everything else around the lagoon was peaceful and quiet, Ernest had this constant racket going on inside his head – a racket that resonated through every bone in his body. He’d had times before when his thoughts just kept rambling in his head and there was nothing he could do to shut them off – but this seemed different. Way different. It was like an actual voice completely foreign from anything he would normally hear. No matter which way he turned or laid to try and ease the sensation, it seemed to return with an even greater annoyance within only a few moments. He tried holding his front legs over his ears – that did nothing but cause the commotion to amplify in his brain. Ernest tried moaning out loud to drown out the noise. No relief. As the sound increased, his entire body started reacting – everything started aching – his stomach was in knots – his brain felt like it going to explode. Finally, at the point of more pain than he could stand, Ernest started going into convulsions next to the other alligators lying on the bank of the lagoon.

Due to all of the commotion, the other four alligators woke up just in time to see Ernest start having dry heaves as he was about to start throwing up. They could sense the pain that he was experiencing with each convulsion that was obviously void of relief. Unable to offer any effective assistance, they all backed off a few feet to give Ernest plenty of room – and not a second too soon either. For just then Ernest’s internal system was finally able to grasp hold of an object of substantial substance to purge – and then there came Maria, flying out of the alligator’s mouth.

Ernest looked down on the human irritant lying there face down in the mud.

Maria turned over and looked up at the huge alligator towering over her and said, “Do you have any idea how bad I smell now because of you? Do you know what it’s like to be crammed inside of your stomach in the dark and not having any idea where I was and…”

Ernest reached out and bashed in her head with his fist. He then tossed her body over to the other four alligators, curled back up on the banks of the lagoon and got on with his afternoon nap.

“Maria? Maria?” called out Phil, still wrapped in the darkness of his unknown habitat. “Maria, what the heck happened? It felt like we were in the middle of an earthquake. Maria! Are you still there?”

With no response, Phil started feeling around in the blackness – once again in solitude. Upon coming across the sponge, he laid his head down on it to get some sleep. “Ah! Peace and quiet once again.”

Upon escaping from an alligator: run don’t talk!
The Groundhog Pentalogy 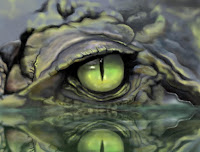 Posted by Freewheelin' Dave at 5:59 PM
Email ThisBlogThis!Share to TwitterShare to FacebookShare to Pinterest