Jackson’s Pawn and Jewelry sits at the corner of Peach Street and Bishops Lane. When the building was first built back in the mid-1910’s, it was the local, neighborhood grocery store - owned by Fanny Gilbert - who had moved into town with her two young children after her husband had gone off to war. She actually kind of lucked into the deal at the time even though she never really had any grocery store experience, let alone actually owning or managing one. But anyway, she gave it a go and both of her children helped her run it when they got older. Fanny passed away in the early 70’s but they had sold the store back around ’55 or so. It had stayed a grocery store for about another five years but then was turned into a women’s clothing store for a couple of years - Mabel’s or Martha’s Dress Shop - or maybe it was Mavis' Dress Shop. Whatever it was called, afterwards it sat empty for quite a while. A couple of odds and ends type businesses were in there off and on but none ever took hold - that is until Jerry Ray Jackson bought the place and opened up a pawn shop right before the turn of the new millennium. 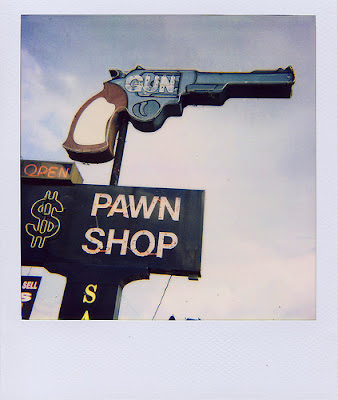 On this particular day, in the back room of Jackson’s Pawn, a young man, shaking and practically in tears was confiding to Mel Jackson, Jerry Ray’s son, the current manager of the shop.  Seems that the young man (young, as in somewhere in his early 20’s) was a good friend of Mel’s and had come to him a couple of weeks earlier to buy a pistol. He wasn’t really sure as to what kind he wanted so Mel had told him that he’d let him borrow a few guns, one at a time, and try them out over the next several days to see which one he liked best. Once he had decided on a particular model, they would settle up. Let’s just say it was not the smartest move that Mel could have ever made in the situation. Let’s also just say that the young man wasn’t the smartest or most coordinated being to ever walk the face of the earth - or the luckiest. Well, maybe he was the tiniest bit lucky in that, just prior to leaving the store earlier in the day, he took the gun out of the waist of his pants where he had originally stuck it, and stuffed it into the outer pocket of his backpack. Unlucky in the sense that the safety wasn’t on. Unlucky in the sense that he didn’t always pay attention to where he walked. Unlucky in the sense that he didn’t see the broken grating at the edge of the curb. Unlucky in the sense that when he stepped off the curb, twisted his ankle on the grating, fell sideways to the sidewalk and landed on the backpack, heard a pop louder than any noise a backpack should have even made when hitting the ground, and actually felt the breeze of a projectile as it whizzed past his shoulder (well, okay, that might be pushing it just a little), he still hadn't grasped the reality of what had just happened. But oddly enough, at that exact same moment - some guy on a bicycle across the street slumped over his handlebars and then fell to the road.


Meanwhile still, back at the police station, Detectives Bass and Salamander were staring at four piles on the squad room table that made up the contents of J.P. Bugtussle's bike bags. One stack consisted of enough shorts, shirts, and underwear to last about a week without having to do laundry. The second stack consisted of half a dozen paperback books, a few road maps, and a couple of notepads with absolutely nothing written in them. The third stack was more cash – exactly $20,500 in bundles of hundred dollar bills. And the fourth stack - the one most puzzling no matter how they looked at it – eight little matching wooden boxes about four inches by three inches by three inches – each one containing a  glass eye.


Posted by Bertha Ashtabula at 7:35 PM
Email ThisBlogThis!Share to TwitterShare to FacebookShare to Pinterest