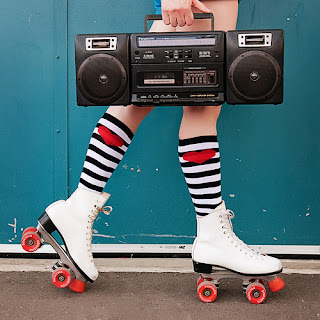 The terminating endpoint of Interstate 20 lies about 75 miles east of Columbia, South Carolina - right where Interstate 95 skirts the northwestern edge of Florence. About fifteen miles south of there, on Highway 52, is the peaceful little town of Coward – population 600 or so. Approximately twenty percent of the population of Coward works at Clevenger’s Skate and Ball Bearing – down off of Friendfield Road just across the railroad tracks. It used to be just Clevenger’s Ball Bearing until Nathan Clevenger married Kate Barfield – whose daddy, Howdy Barfield, owned Kate’s Skate-O-Rama (named after his favorite daughter, naturally) on the north end of town. A year or two after Kate and Nathan were married, Howdy came to them with the idea of expanding the ball bearing factory. This was in 1939, a couple of years after the Roller Skating Rink Operators Association (RSROA) was formed and Howdy had the insight to know that roller skating had no place to go but up. He convinced Nathan that they should start manufacturing roller skates in addition to ball bearings. So they did. Needless to say, the business boomed. In addition, as far as Sherry Castle is concerned, the business is still booming and going as strong as ever today.

Sherry is the current office manager for Clevenger’s Skate and Ball Bearing. She’s a pleasant woman - somewhat tallish and slender, with long, blonde hair on top of a good head for business.  Nathan’s grandson, Edithion (named after his grandmother), makes sure that everything out in the shop runs smoothly – but it is Sherry who has a handle on everything in the front office - except maybe for today. Today Sherry seems to be in a trance – just staring at her computer screen.  Every morning, when Sherry comes to work, she gets a pot of coffee going in the break room then checks the glue trap wedged between the fridge and the wall to see if any unwanted visitors had been nabbed overnight. Next she heads into her office to read the news on the internet while she waits for the coffee to be ready and for the rest of the office staff to show up. The headline that stopped her dead in her tracks this morning: J.P. Bugtussle Shot Dead!

Sherry sat there, just staring at the computer monitor. Her senses numb. Her mind started to wander – wander back to a time nearly fifteen years ago…

Meanwhile, in an overly chilly room down in the basement of the Alphonse Baroovra Memorial Hospital, Dolores Bugtussle prepared herself to identify the body laying under the sheet on the gurney. It had been eight years since she had last actually seen her son – although he called her at least twice a week on the phone and they would talk for hours. No one would have ever guessed that they lived in the same town – eighteen point seven miles apart.  It wasn't an estranged relationship – it was just strange – as had been so many things about J.P. Bugtussle's life – especially those thirty-seven beginning years of his life. As Dolores stood there, nervously staring, waiting, so many of those phone conversations with her son flashed through her head – primarily the ones over the last year or so – after his change. Those latter conversations were full of life and happiness and joy and – downright fun. Tales of all the interesting people he had met and helped while riding his bicycle around the country. Not the tedious, monotonous, hum-drum, callous business-like conversations that she dutifully listened to in times prior.

The coroner pulled the sheet back to expose J.P.’s head and chest. Dolores looked, quickly turned her head away, and then slowly returned her gaze to her son. She cupped her hand to her mouth. She nodded her head, acknowledging that this was indeed her son. Then, a puzzled look came across her face – her brow clenched tight over her eyes. She focused on some sort of a – for lack of a better word - a port. A port about two inches in diameter surgically implanted in his chest directly above his heart.

“Yes,” replied the coroner to her wordless question, “we are a little puzzled about that ourselves.”

Posted by Bertha Ashtabula at 9:24 PM
Email ThisBlogThis!Share to TwitterShare to FacebookShare to Pinterest