In the front office of Clevenger’s Skate and Ball Bearing, Sherry Castle returned the telephone handset to the cradle – the bizarre conversation still spinning 'round and 'round in her head. A conversation that had started out with a need to speak to Nathan Clevenger Junior and then somehow ended up recounting a childhood trauma that became the catalyst for abruptly steering it in the direction of the Island of Madagascar and the need for some blood from a panther chameleon.  She thought to herself, “Sure makes answering the phone to take an order for six hundred gross containers of 5/16" diameter ball bearings seem drastically bland.”

Sherry had barely even finished thinking that thought before she counter-thought to herself, “What the hell am I thinking? Anything makes taking an order for six hundred gross containers of 5/16” diameter ball bearings seem drastically bland!”

JP had explained to her how he had suffered a horrible accident when he was five years old which had resulted in the loss of his right eye. He had gone on to tell her, including the preface, “as unbelievable and crazy as this may sound,” of a procedure he had quite recently read about wherein it might be possible to regain the sight in the affected eye. He admitted to her that the procedure appeared to be quite unorthodox and questionable to say the least. But when you’ve lived the last twenty years with half your normal sight and you hear of news that may return your vision to normal, no matter how far south of “alternative” the procedure may be, it’s a road you owe to yourself to explore.

Sherry leaned back in her office chair and raised her hands up to the sides of her head. As she closed her eyes, she rubbed the tips of her fingers hard into her temples in an attempt to massage the thought process into adequately interpreting the feasibility of JP’s fantastic tale. She leaned further back in her chair – her fingers continuing along the sides of her head until they met and interlocked with each other behind her neck. She sat there, motionless – staring out the front window – not focusing on anything. Thinking.

After a few moments, Sherry sat upright, reached across her desk and picked up the phone. She punched in the number for New Orleans directory assistance.

Dr B sat at the terminal at DFW Airport waiting for his trans-Atlantic flight. Looking at his watch, he noted that he still had nearly an hour before the plane would start to board. Once on board, and once they wait for what always seems like ten times longer than it needs to be while other passengers take their sweet time at finding a place to stuff their carry-on luggage and refuse to promptly find their seats and properly buckle themselves in – and then once they wait a little while longer while the flight attendants go up and down the aisle asking those same people (all of whom know darn good and well that they need to keep their seats upright and table trays in the locked position until the flight is well underway) to put their seats upright and to return their trays to the locked position – then and only then will the captain pull away from the gate. After that ordeal,  it will be a simple matter of spending the next twenty-four and a half hours on the plane – stopping briefly in Atlanta and then De Gaulle in Paris – before landing at Ivata Airport just outside of Antananarivo, Madagascar.

So there Dr B sat, in the DFW terminal, running the next twenty-six or so hours of his life through his head. He had brought a book to read on the plane – which he had started to read while he sat there waiting to board – but then put it back in his carry-on after reading half-way down the first page. He decided people-watching would be more entertaining for the time being.

While in the process of people-watching, he noticed a young boy walking with his father.  A boy – probably about five years old – walking along side and holding his dad’s hand. The boy had a white gauze bandage held in place with surgical tape over his right eye. As Dr B watched them walk by, his memory wandered back in time – back to the living room of Dolores Bugtussle’s home in the winter of ’77. 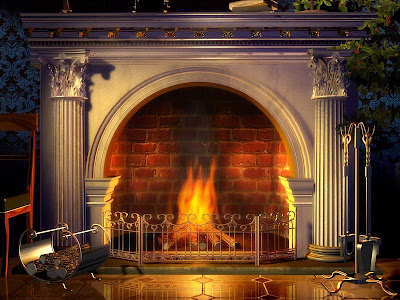 The first big snow had just fallen and it was a perfect evening for the winter's first fire in the fireplace and for Dolores to invite Dr B over for dinner. Since they lived only three houses apart, he was a frequent dinner guest in the Bugtussle home. JP was playing nearby, running his little toy trucks up and down the roads he had outlined using bits and pieces of his Tinker Toy sticks. The series of images ran through Dr B's head - just like they had time after time again since the day it happened: Getting up from the chair to go over and adjust the logs with the fireplace poker; Moving them around until he got the biggest blaze possible going in the firebox; Turning around to get Dolores' approval of his fire-building skills; The memory of her face as it changed from a face of laughter to one of shear panic; The sound of JP's scream; The realization that JP had been running to see what he was doing at the fireplace at the exact same moment that he had turned with the hot fireplace poker pointing outward in his hand.

Alphonse had never been able to fully forgive himself for that accident nine years ago. By every rational thought, he knew that it was just that, an accident. But that didn’t relieve the pain he felt or the deep sense of responsibility for his careless actions of that night. For the last nine years, he had searched the vast resources available in the medical field for information – fully knowing that nothing existed that could help young JP. At some point in time, that guilt – that deep sense of responsibility – really starts eating at a person. When you’ve lived with that unbearable amount of guilt for the last nine years and then you hear of a procedure that may return a young boy’s vision to normal – no matter how far south of “alternative” that procedure may be, it’s a road you owe to yourself to explore.

“Just set the tray down on this desk here,” instructed Detective Bass to Randy, the delivery boy from the deli two blocks over. Randy set the tray down the pulled the ticket loose from the top Styrofoam box and handed it to Arnold.

“I’ll need you to sign this one please, sir,” said Randy.

Arnold reached up to his shirt pocket – patted it – no pen. Sal reached into his jacket pocket and handed his pen to Arnold. Leaning over the desk, Arnold took the ticket, set it on the desk and started to sign it. No ink came from the pen. He immediately moved his hand over to the edge of the desk blotter and scribbled little circles on the blotter until the pen started writing. He signed the ticket and handed it back to Randy – gave Sal back his pen.

Sal and Arnold sat at the desk eating their lunch – not saying anything to each other - just enjoying their sandwiches and chips. Arnold was halfway through with his sandwich when he glanced down and noticed the scribbles that he had just made with Sal's pen - the black circular scribbles. The blotter was the same blotter that had been on his desk for a couple of months or so - displaying all the same doodles that had been doodled over the course of those same couple of months or so - with the exception of the blue scribbles made with the pen from J Bugtussle's bike bag just the day before. Those blue scribbles were nowhere to be seen.


Posted by Bertha Ashtabula at 12:51 AM
Email ThisBlogThis!Share to TwitterShare to FacebookShare to Pinterest