“A witch doctor?” Sherry questioned in return, “Why on earth would you ask me something like that?”

“It’s just—Well, I thought—Umm—“ JP stammered, completely out of character.  “I just remember this one conversation we had a while back – the one where you were complaining about that bozo that delivered the office supplies. You remarked a couple of times how he had gotten out of line, made some inappropriate comments – remember?

“Well you said something then about going home and sticking some pins in your Voodoo doll of him. So, I thought—“

“Mr Bugtussle, I can’t believe you thought I was—“

Over the course of the last three months, as the sale progressed on Clevenger’s Skate and Ball Bearing, Sherry had talked to JP at least twice a week. The major portion of those phone calls, at least ninety-five percent, was purely business. During the other five percent, various normal pleasantries, along with a few tiny morsels of personal information, were exchanged between the two – and apparently, some little tidbits of comments that Sherry had made in passing and assumed had maybe gone unnoticed. The truth of matter was, Sherry had practiced Voodoo since she was a little girl living down in New Orleans – New Orleans Voodoo. She knew good and well that the “sticking of pins in dolls to cause pain” was a common misconception of Voodoo practices – but sometimes one just goes along with the popular belief if it fits the topic of conversation at the time. She really hadn't meant anything by the comment – barely even remembered making it – but now, possibly sorry that the words ever left her mouth. Nevertheless, going from an off-the-wall comment about a Voodoo doll and then making a gigantic leap to needing to find a witch doctor – well, this was a topic of conversation with JP that had taken Sherry completely by surprise. She wasn’t sure how to continue. 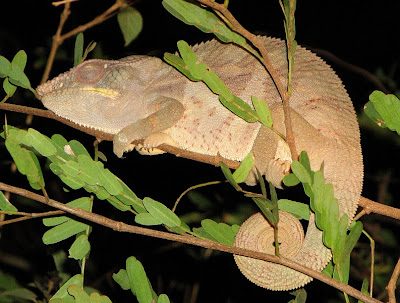 “I’ll call you JP only if you start calling me Sherry. Now – are you kidding around about this witch doctor thing?”

“The blood of the Madagascar Panther Chameleon.”

The corner of Peach Street and Bishops Lane is lit at night by a single lamppost with an incandescent bulb. The ancient lamppost does a fair job of lighting the intersection but doesn’t offer much in the way of security for the surrounding buildings. In fact, the corner of Peach Street and Bishops Lane bathed in the soothing light of the quaint little lamppost at night would make a great painting to hang near the comfortable chair and end table in the quiet reading corner of one’s living room – as long as the artist didn’t include a sound option – an option that would currently include the ear-piercing, pulsating screech of the alarm going off at Jackson’s Pawn and Jewelry.

In the seconds prior to the alarm going off, a figure emerged from the shadows, hurled a five-holed, king-sized brick through the plate glass window thus changing the hand-painted name of the place to Jacks welry. Jumping through the newly-created entry, the figure ran past every item in the front of the store, including the sensors that set off the alarm, and headed straight for the door to the back room. As the alarm siren penetrated the previously-peaceful night air with its warning, the figure quickly entered the back room, went to the desk, opened the knee-hole drawer and retrieved the handgun placed there  a mere few hours ago by the owner.  With gun in hand, the figure departed the store as expeditiously as it had entered.


Alphonse “Dr B” Baroovra unlatched the storm door, held it open and motioned for JP to come inside. As they walked to the center of the room, he grabbed the remote off the coffee table, and with an audible click of the big button on the side, turned off the television set. With his outstretched left arm he signaled for JP to take a seat at the near end of the couch. He handed JP a travel brochure and then said, “Want something to drink? I’ve got iced tea and Dr Pepper. Or water. What would you like?”

Dr Alphonse Baroovra had been practicing medicine in town for nearly twenty-one years. He had grown up in this town. When he was in elementary school and high school, his family lived right next door to the Bugtussle family. Homeronius Peropavlovsk Bugtussle (Homer – for obvious reasons), was Alphonse’s best friend – Buds for Life as they called themselves. Alphonse and Homer were in Scouts together, went to church together, took the same classes in high school, got the same part-time jobs while in school (first, working at the old one-screen movie theatre and then later working as stock boys and sackers over at at Moe’s Grocery Store – the same year that Fanny Gilbert sold the place. They’d asked Ol’ Lady Gilbert several times for a job but she always told them that it would be a cold day in hell when she would hire the likes of them and then she would wave her hand in a shooing fashion and say, “Now get on outta here unless you’re gonna buy something – you’re wasting my time.” Moe Ziegler hired them on the spot the day after he bought the store.) – without a doubt, the two guys were inseparable – Buds for Life.

All through college and then med-school, Homer and Alphonse talked about the day that they would open up their practice together. It was their common goal – and one of many that they managed to achieve. Within a year after opening their practice, Homer married Dolores. Six months later, Alphonse married Beth. The only additional importance that Homer and Beth have to do with our story pertains to what happened during the time between the months of June and December 1971. That was the span of time that Homer and Beth decided to have their affair. However, the affair came to an abrupt end on December 17th when the car they were both in attempted to pass an 18-wheeler at about ninety miles per hour – by going under it. JP was born two months later. Alphonse delivered him in Dolores’ house. For the next fourteen years, Alphonse help to raise JP – including home-schooling him. For those fourteen years, JP had never set foot outside of Dolores’ house – until tonight.

“Mom says you’re taking a trip?” queried JP as Alphonse returned to the living room with a glass of ice and a bottle of Dr Pepper, “Where are you going?”

“Did you even look at the travel brochure I just handed you?” answered Alphonse.

JP had been thumbing the pages of the brochure while he waited for “Teach” to return with his drink but had never even bothered to read it or even glance down at it. He flipped it back over to look at the front cover - CYCLING TOURS OF MADAGASCAR.


Posted by Bertha Ashtabula at 12:19 AM
Email ThisBlogThis!Share to TwitterShare to FacebookShare to Pinterest