A block and a half west of Elysian Fields Ave on Burgundy Street, just slightly removed from the touristy French Quarter district of New Orleans, sits a typical wooden framed, two story structure with faded buckskin-colored clapboard siding. Next to the gate at the base of the wooden steps that lead up to the porch and front door to the house is a hand-painted, oval metal sign reading La Ficelle House of Voodoo   – and, at the bottom of the sign, an arrow pointing towards the right with the instructions: ENTER THOUGH SIDE DOOR. On the inside of the gate, a pathway of stepping stones pave the way across the front of the house and around the side to a small gabled overhang sheltering a recessed alcove housing a single half-glass door. Hand-painted on the glass, in the same style as the metal sign out front: Mam’zelle Louise La Ficelle – Readings and Rituals. 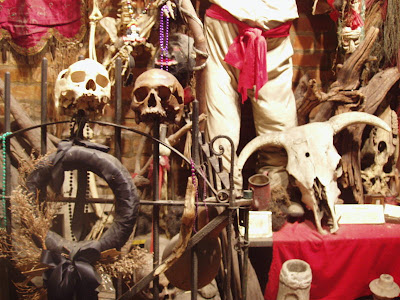 The decorating style on the inside of the La Ficelle House of Voodoo might adequately be described as – typical Voodooshoppian: a little jingly jangly bell above the door to announce the entrance (or departure) of a customer into (or out of) the dimly lit quarters; narrow walkways between rows and rows of cabinets, all with tiny cubby hole shelves containing a wide assortment of oils, perfumes, waters, washes and incenses; bin after bin of various roots and herbs and plants; racks of talismans, holy cards, Tarot cards, beads and ritual supplies; shelves of skulls and skeletal  figurines - both serious and whimsical;  and an entire wall dedicated to masks, Voodoo dolls and other Voodoo curios. In the middle of it all, tucked in between two racks of CD’s (presumably the latest and greatest sounds of Voodoo), sits a gray metal desk with an old-fashioned cash register on one end. Behind the desk, in a well-worn, wooden pedestal desk chair, sat Mam’zelle Louise La Ficelle filling out a supply order form.

At first glance, Louise La Ficelle could have been mistaken for a leftover from the Woodstock Music and Art Fair (3 Days of Peace & Music) – her late 60’s / early 70’s Hippie fashion well-defining that assumption. Upon a closer look, one could easily tell that Louise was barely in her twenties – twenty-five tops. Her waist-length, brunette curls flowed over a tie-dyed peasant blouse accented by an assortment of beaded necklaces and bracelets – clanging against the desktop as she jotted down numbers on the forms.

She stopped writing for a moment and glanced at the phone next to the cash register.

Dr Alphonse Baroovra climbed aboard his touring bike, rolled out of the parking lot of the Hotel La Ribaudiere onto Rue Paul Dussac and started making his way across town heading west.  His bike was a modified-for-touring, late 70’s Schwinn Paramount ten-speed - Campagnolo Chorus componentry, Brook's leather saddle, headlamp and tail lamp powered by a generator mounted to engage the front tire when needed, front and rear clamp-on racks with panniers,  handlebar and rear rack bags packed for two weeks of exploring on the roadways of Madagascar. He would make use of his tent and sleeping bags for the bulk of the nights as the towns with adequate hotel accommodations along the route were few and far between – the two better towns being the ones where he planned to take a two-night stop and rest up. His food and on-the-road-cooking was planned for accordingly also.

His travel plans commenced with navigating the crowded city roads of Antananarivo for about seven miles until he intersected Route 4, at which point he would travel predominately north to the city of Antisirnana – approximately 680 miles away on the northern tip of Madagascar. Allowing himself two weeks to make the journey with twelve days of riding and two days of rest, he figured he would have no problem at all as long as he could maintain a 50- to 60-mile per day average. Afterwards, he would take a bus back to Antananarivo and then a flight back to the states – a "Tour of a Lifetime!"

But experiencing a bicycle tour of Madagascar solely for the sake of experiencing a bicycle tour of Madagascar was not the predominant motivation driving Dr Alphonse Baroovra. That motivation came after years of studying resources and references outside the normal accepted medical practice. A study that lead Dr B into the darkest corridors of alternative medicines – alternatives based on absolutely no scientific evidence whatsoever. Folklore, myths, legends, witchcraft, voodoo, hoodoo – Dr B left no stone unturned in his quest to right a terrible wrong that he had committed nine years before.

The most recent stone turned – the stone that for some unknown reason seemed to make the most sense to Dr B – the stone that lead him to seek out the blood of the Madagascar Panther Chameleon. 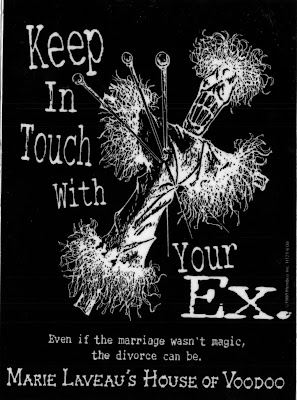 Ben Franklin High School in New Orleans was started in 1957 and originally housed in the old Carrollton Avenue Courthouse. As the school attendance grew, so did the need for larger accommodations – resulting in a move in 1990 to buildings over on Leon C Simon Drive – on the campus of the University of New Orleans. Part of that first graduating class after the move – the 31st graduating class of Ben Franklin High – were two girls who had shared over a decade-and-a-half together as best friends and neighbors. Two girls who swore that they would remain "best friends forever and ever and ever" but who went completely different directions within a month after graduating from Ben Franklin High School. Two girls who hadn't spoken a word to each other in nearly seven years until...

“Louise? Louise, is that you?” asked Sherry.

“This is Louise La Ficelle. Who am I speaking to?”

“It’s Sherry – Sherry Castle. Louise, I need to ask you a big favor.”

“I’m telling you, Sal – it was right here!” insisted Albert as he repeatedly jabbed his index finger into the lower right-hand corner of his desk blotter – the exact same spot where now appeared only black scribbles – scribbles from the pen Sal had taken out of his jacket pocket a few minutes earlier. “I took JP’s pen out of the bike bag yesterday, scribbled a few circles right here. It was blue ink. You wrote it down – blue ink ballpoint pen. Check your notes.”

On Day Four of his journey, Dr B had cycled into the town of Antanambazaha. He had found a hotel – showered and shaved and was enjoying dinner at a little café across the street. His journey so far had been nothing short of marvelous. The first day had been the slowest and he fell short of his goal by only cycling 46 miles. He blamed that mostly on the traffic in Antananarivo – it had taken him a little over two hours to get out of town. However the next couple of days more than made up for lost time – both of them right at 70 miles each – topped off with a 65-mile Day Four.  Dr B finished his dinner, ordered a cup of coffee and then spent the rest of the evening engaged in his favorite pastime of people-watching.

Dr B’s itinerary included spending two nights in Antanambazaha – the one-third point in his cycling trek. He would wash his clothes in his hotel room sink, do some shopping in the morning after breakfast, maybe a little site-seeing in the afternoon, followed by an early dinner and prepare for an early start the next day.  He would then tour another four-day stretch followed by another one-day break.  The final segment should put him into Sadjoavato on Day Thirteen – and a rendezvous with a Sadjoavato resident who had replied to his letters and promised him a good supply of panther chameleon blood.

On Day Six of his journey, Dr B awoke early, ate a good breakfast – not too heavy, not too light – packed his bags, aired his tires and hit the road – all as planned. He turned off of Route 4 onto Route 6 and began the day’s journey to the north.

It was the last time anyone ever saw Dr Alphonse Baroovra.